Built For Comfort Not For Speed – Tick Tock, Tick Tock 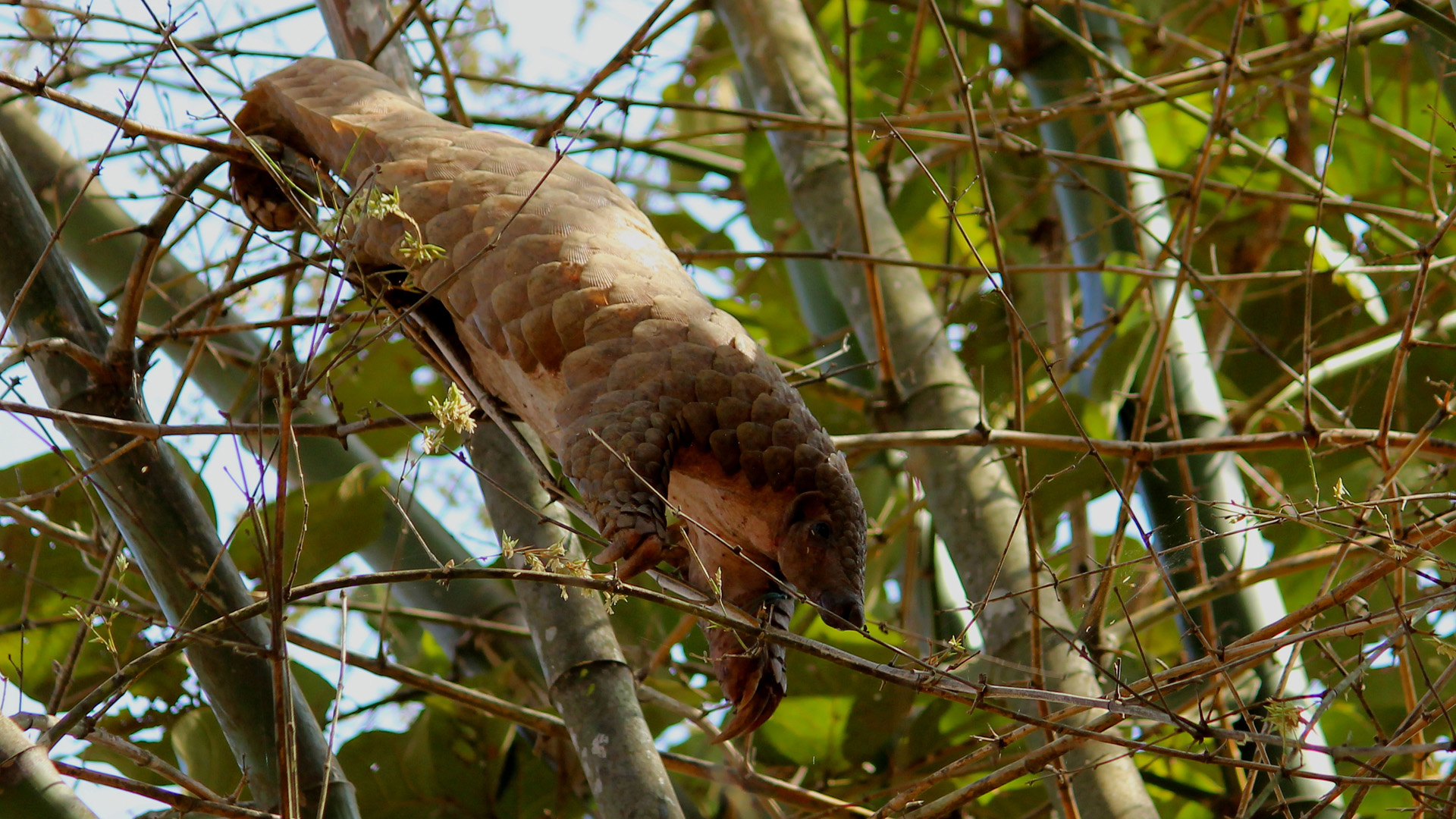 A great-and-greater number of people around the world are turning their backs on mainstream conservation organisations. People and activist groups, such as Extinction Rebellion, are stepping in to the leadership and innovation void left by the well know names, who are stuck in their business as usual approach and are acting as if they have all the time in the world. 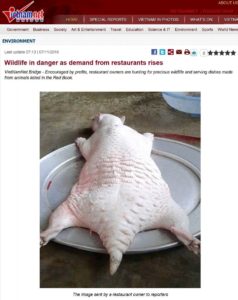 Here is a perfect example of why many people have walked away from these organisations over the last 10-20 years. A November 2018 article on a Vietnamese news site highlights Wildlife in danger as demand from restaurants rises, stating that encouraged by profits, restaurant owners are hunting for precious wildlife and serving dishes made from animals listed in the Red Book. The article gives the example of pangolin, that at VND4 million per kilogram (AU$236/Kg) is only available to Viet Nam’s elite.

The article talks to a motorbike taxi driver, one of 10 drivers who specialize in carrying wild birds and animals from the market to restaurants in HCMC. It also quotes a restaurateur who states “she only sells real wildlife meat, and if clients want live animals, they should arrive 30 minutes early to see how the animals are slaughtered.”

Now while this is shocking, it is not the critical issue. The key issue is that some fantastic research was published nearly a decade ago regarding the consumers of Viet Nam’s evolving wild meat restaurant trade, yet in all this time I haven’t seen anything done to create a demand reduction campaign that resonates with this consumer group or that would trigger a behaviour change in this group.

Let’s look at the timeframe. Dr Rebecca Drury, of Flora & Fauna International, was one of the first to look at this.

Yet here we are, a few weeks away from 2019 and nearly a decade after this valuable research provided the initial insights needed to create a demand reduction campaign targeting the consumers of exotic wild meat, such as the pangolin. Hence my comment – built for comfort not for speed. 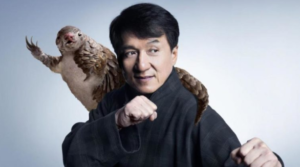 In all this time, I haven’t seen a single demand reduction campaign targeting the consumer group, for pangolin, in wild meat restaurant trade. Yes there has been the very cute WildAid advert with  Jackie Chan fighting for pangolins. It’s a great advert but it is an awareness-raising advert, not a demand reduction advert.

Now some might say, we did awareness-raising because too few people had heard of the pangolin, in fact it is often referred to as the most trafficked mammal that you have never heard of. A valid point, but to be effective to stop pangolin poaching, broad awareness-raising and education campaigns should run in parallel with highly targeted pangolin consumer behaviour change campaigns.

This perfectly highlights the lack of urgency that too many of the big and specialist conservation brands consistently demonstrate; and why many people feel this lack of commercial understanding is showing their skills are becoming increasingly less relevant, at least in tackling the illegal wildlife trade.

Why do universities bother doing this research if it is not acted upon? You have to ask yourself if again it is all about bringing in the money? Well some seem to think so. Even when there is great research, traditional conservation doesn’t move in to action. If they can’t see how much their own behaviour needs to change, it is not a surprise that they don’t know how to create useful consumer behaviour change campaigns.

But at least this research has been done for pangolins, even if it hasn’t been acted upon.

In an August 2017 blog, my last under the Breaking The Brand banner, before we evolved to Nature Needs More: The Elephant In The Room  I wrote about the rhino horn pro/no trade debate

When I asked Save the Rhino the question about what they believe in regard to the users’ desire for a farmed vs wild product, the response was “we have not been involved in conducting any formal research in the area of what consumers say they would and wouldn’t purchase”. I would say that, if they believe that they need definitive research before they would be able to make a comment on this, then why hasn’t the leading rhino charity in the world commissioned such research?

So over 12 years in to the current rhino horn crisis, the leading rhino charities still haven’t done this research. If not them, then whom? Tick tock, tick tock.

All of this reflects the current overly academic and overly tactical skill set of the conservation sector; it is a process driven, not results driven approach. Why hasn’t there been the necessary diversity of skills in the sector compared to what is needed to tackle the international wildlife trade? In the April 2017 blog: Want To Know Why Conservation Is Failing? Read On…. I wrote:

Yes, people working in conservation are supported to do research, present and go to conferences and write academic papers. This has honed their specialisation and what I’ve seen, from nearly 20 years of executive coaching, is that specialists rarely make good problem solvers of problems that matter. Additional professional development is required so the conservation sector can respond in a scientific, political and commercial way to the current wildlife poaching and trade issues.

If each consecutive step from research to action takes over a decade to make, then these animals don’t stand a chance. Is it any wonder that other people and groups are stepping in to the leadership and innovation void left by the well know names, who are stuck in their business as usual approach and are seen to be acting as if they have all the time in the world? Tick tock.

For those who would like to know more about the pangolin, check out the linked papers and we have pulled together some information below: 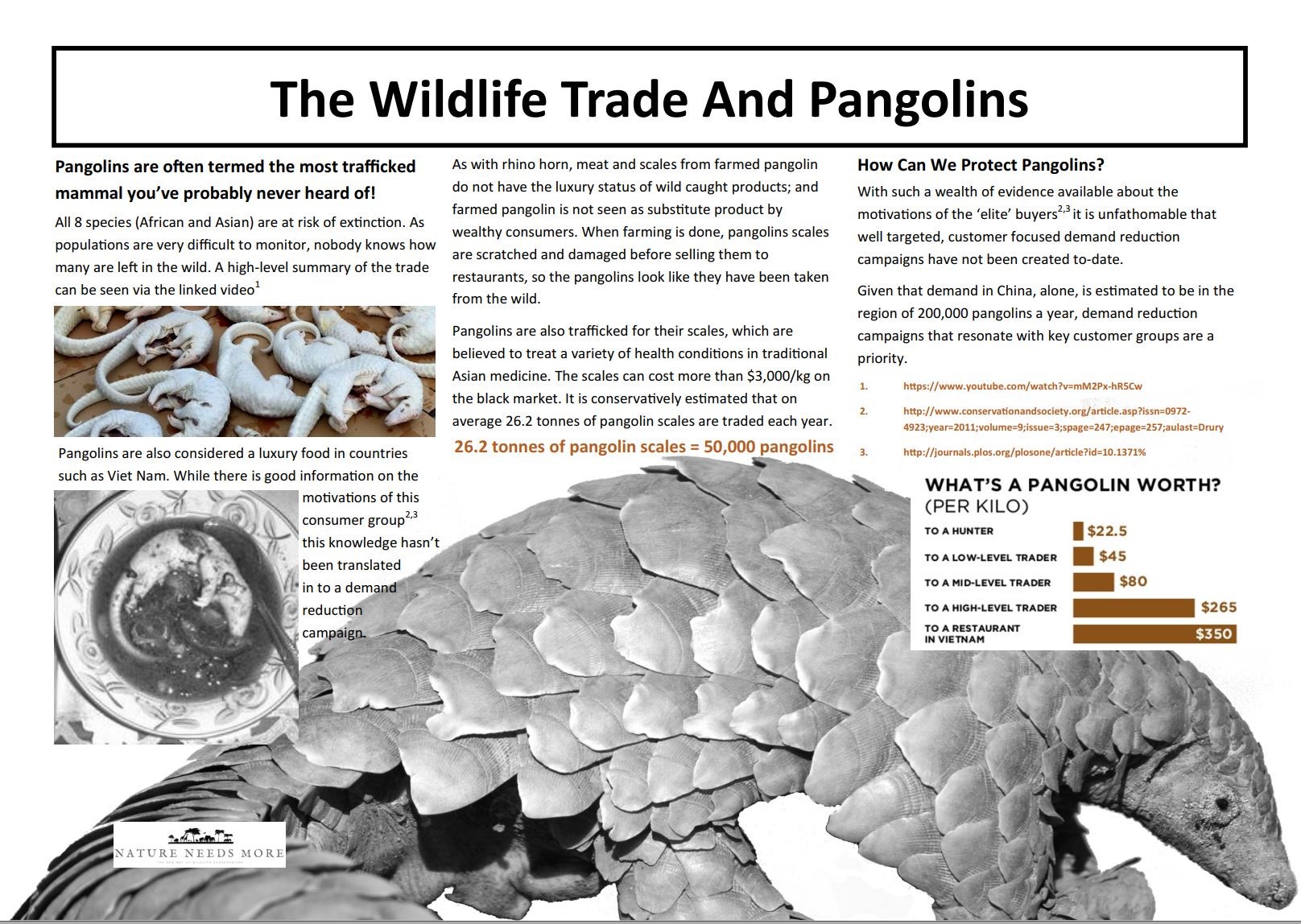