Christmas Thank You From NNM 2019

As we come to the end of NNM’s biggest year to-date, I would like to take this opportunity to thank you for your support and for the continued encouragement of our approach to conservation.

I finish this year with a review, but first a would also like to acknowledge and thank the fantastic Nature Needs More team, Peter Lanius and David McPherson, our collaborative partner on several projects Donalea Patman, founder of For the Love of Wildlife (FLOW) and also Nicholas Duncan, of the SAVE African Rhino Foundation (and the SARF Committee) who has supported my conservation education regarding Southern Africa since I first met him in 2012. I feel very privileged to work with this very knowledgeable and dedicated group of people.

The last 12 months of work has been big, so I will highlight just some key areas:

Since returning to Australia we have already started to inform signatory countries of the eCITES Base Solution and have linked them to the UNCTAD representative who is leading the implementation.

The Needs For Pragmatic Solutions

At CITES CoP18 we challenged the World Bank representative and key donor countries on why US$200Million has been donated (more since 2016) to promote the sustainable use model; yet, in a decade, no one has committed the US$30 Million to build the global e-permit system to monitor and manage the growing volume of trade in endangered species? The response from the World Bank representative: No one has ever asked us for funds to implement the e-permit system.

Implementing a global, electronic trading system will not only ensure the legal trade in endangered species is traceable from source to destination, it will also close the loopholes that enable the illegal trade to reach a value of up to 80% of the legal trade. 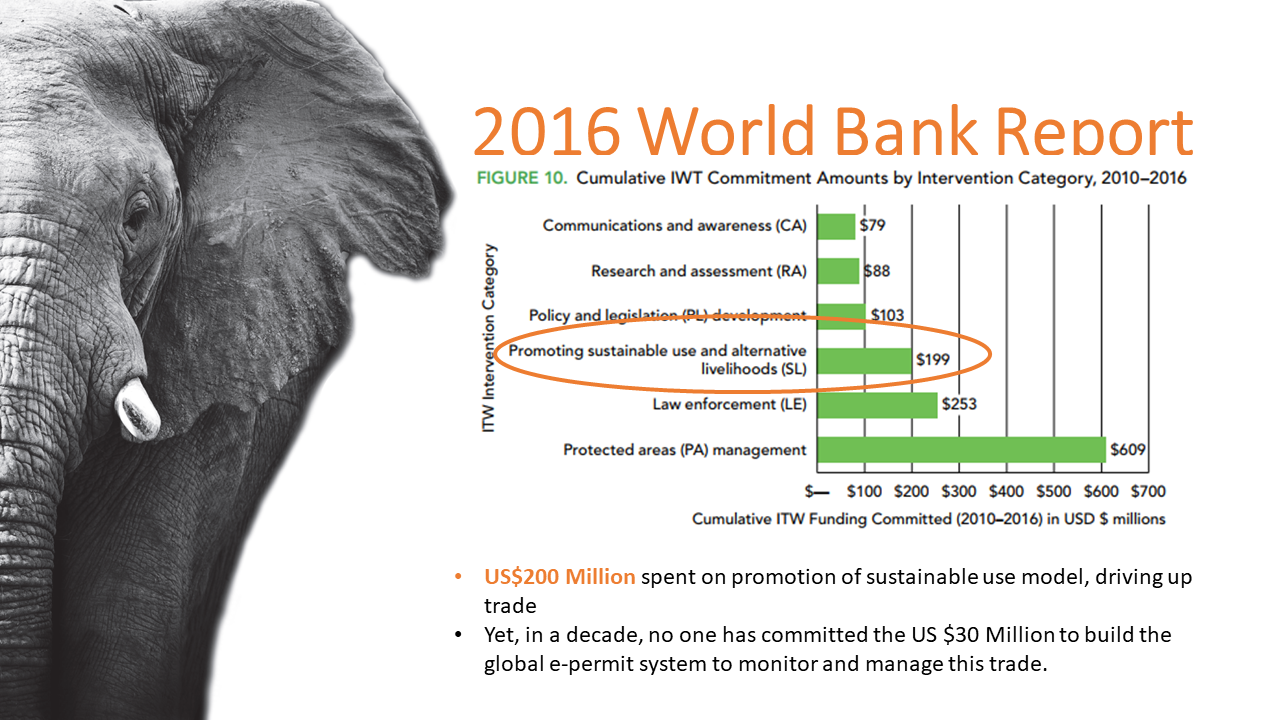 NNM and FLOW are encouraging all eligible countries to contact the World bank for the US$150,000 funds needed to implement the eCITES Base Solution system.

We have tried to engage other NGOs around the world, large and small, to encourage them to speak to government representatives in countries where they work about the eCITES Base solution and World Bank funding via the Global Wildlife Program, but we are finding that either the significance of the system goes over their heads or they don’t want to ‘rock the boat’. But some people understand the significance of implementing an electronic permit system.

“Rolling out an electronic permit system [withing CITES] would have an
immediate, positive benefit in driving down the illegal trade. It hasn’t been
done to-date because too many countries want to maintain ‘plausible
deniability’ about the abuses of the legal trade and the laundering of
illegal items the paper system allows.”

There is a reason the SADC countries are getting nervous and if NGOs really wanted to corral them, they would work on as many of the CITES signatory countries as possible to implement a secure and trustworthy electronic permit system as soon as possible; eCITES Base Solution can be rolled out in 8-12 weeks.

As a result of this work and for possibly the first time since I started looking at the illegal wildlife trade in 2013, I can see that there is a very real and pragmatic solution to saving endangered species (rhino and all 36,000 species listed under CITES for trade restriction); the sad thing is this could have been done over a decade ago.

We have a strategic program of work designed for 2020, which includes following up on all the projects we are working on, but there is more. Just one sneak peek into some of research that we are doing and another area that needs investigation – the World Trade Organisation (WTO).

As a 2016 European Parliament report states “The wildlife trade is one of the most lucrative trades in the world. The legal trade into the EU alone is worth EUR 100 billion annually”.

The report highlights that the WTO is one of the organisation considering this trade and states “Under WTO rules additional checks and regulations are permitted in cases where trade could negatively affect the environment.”  [Again, from the report]: In 1994* the WTO ministers agreed to set up the Committee on Trade and Environment (CTE), and CTE has been a permanent observer at CITES since 1997. To date there have been no disputes between WTO and CITES. Although the WTO primarily acts as a regulatory framework to facilitate international trade (no shock there!)… the WTO formally accepts that exceptions to free trade rules are very important in environment related issues.

*The 1994 date is a result of the Marrakesh Agreement, where the WTO discusses the importance of optimally using the world’s resources in accordance with the objective of sustainable development and seeking to protect and preserve the environment.

[Again, from the 2016 European Parliament report]: In 2015 CITES and the WTO produced a joint statement to cement co-operation between them. WTO and CITES agreed that that the well-being of economies, habitats, and societies are inextricably linked. So, let’s look at the WTO and the CTE. The Committee on Trade and Environment (CTE) has a broad mandate – from the WTO website “it has contributed to identifying and understanding the relationship between trade and the environment in order to promote sustainable development.”

Currently, for example it is involved in the negotiation of the Environmental Goods Agreement. This negotiation, of 17 WTO members (Australia, Canada, China, Costa Rica, the European Union and its 28 member states, Hong Kong, Iceland, Israel, Japan, Korea, New Zealand, Norway, Singapore, Switzerland, Chinese Taipei, Turkey and the United States), is the largest goods market access negotiation underway in the WTO. While I acknowledge that the Environmental Goods Agreement is not specifically about endangered species, it begs 3 questions: 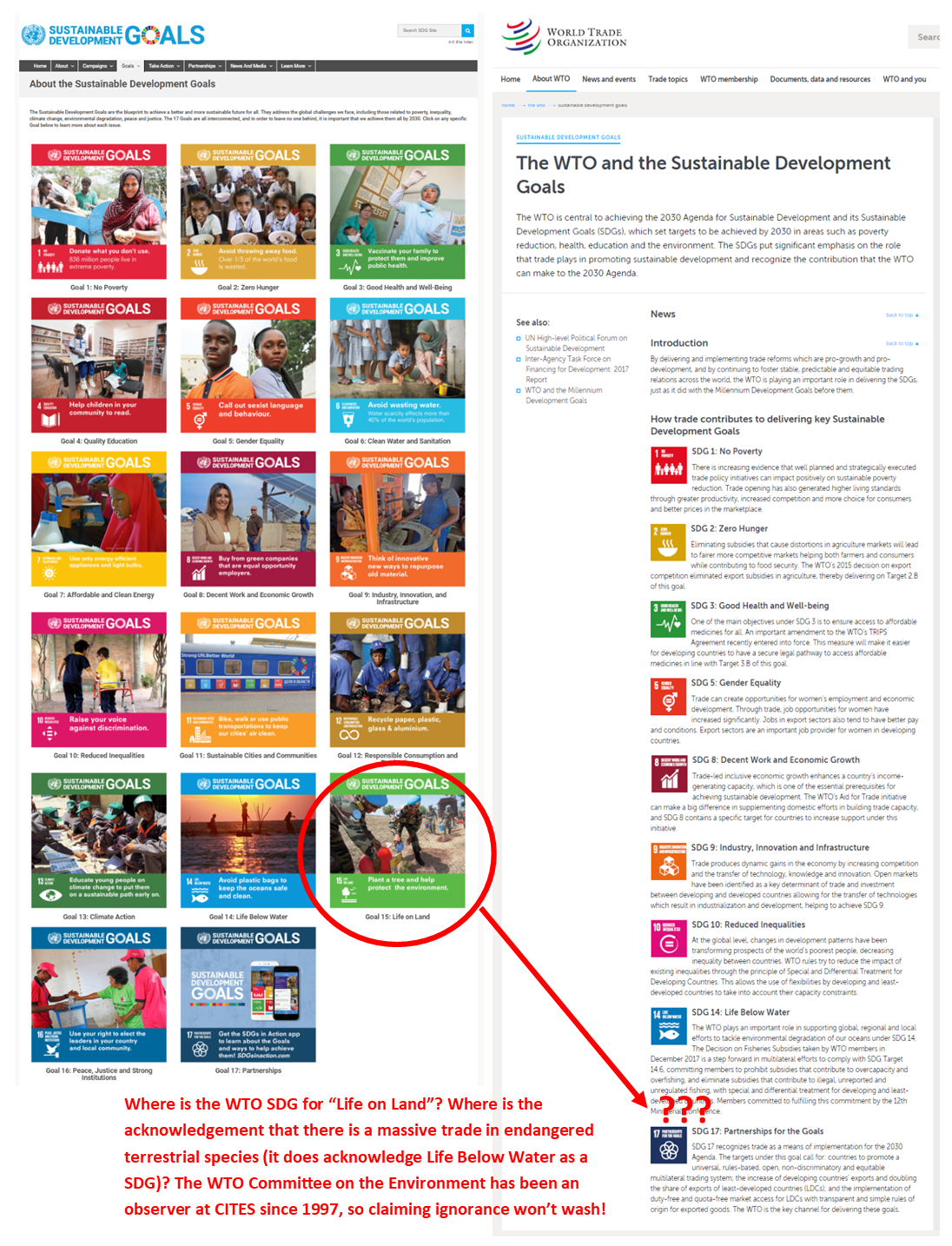 We will share more about our work on this in 2020.

Our Thanks And Best Wishes

In the meantime, I can’t thank you enough for all your interest and support. To everyone who hosted and donated to our November fundraisers – the Style Icon Afternoon Tea and the World Games For Wildlife – these month long events helped raise over $18,000 which will go towards out project working on the systemic flaws in the legal trade system that enable wildlife trafficking on an industrial scale. Because we don’t take donations from governments, we can’t be forced to conform and we can challenge governments, intergovernmental organisations, businesses, conservation agencies, NGOs and the mainstream media.

We couldn’t have done all of this without your donations and your amazing support over the years. I hope you have a wonderful Christmas and all my best wishes for the year ahead. Together we can make 2020 not only a better year for rhinos but all 36,000 endangered species listed for trade restrictions under CITES; now that would be quite a New Year’s Resolution!!