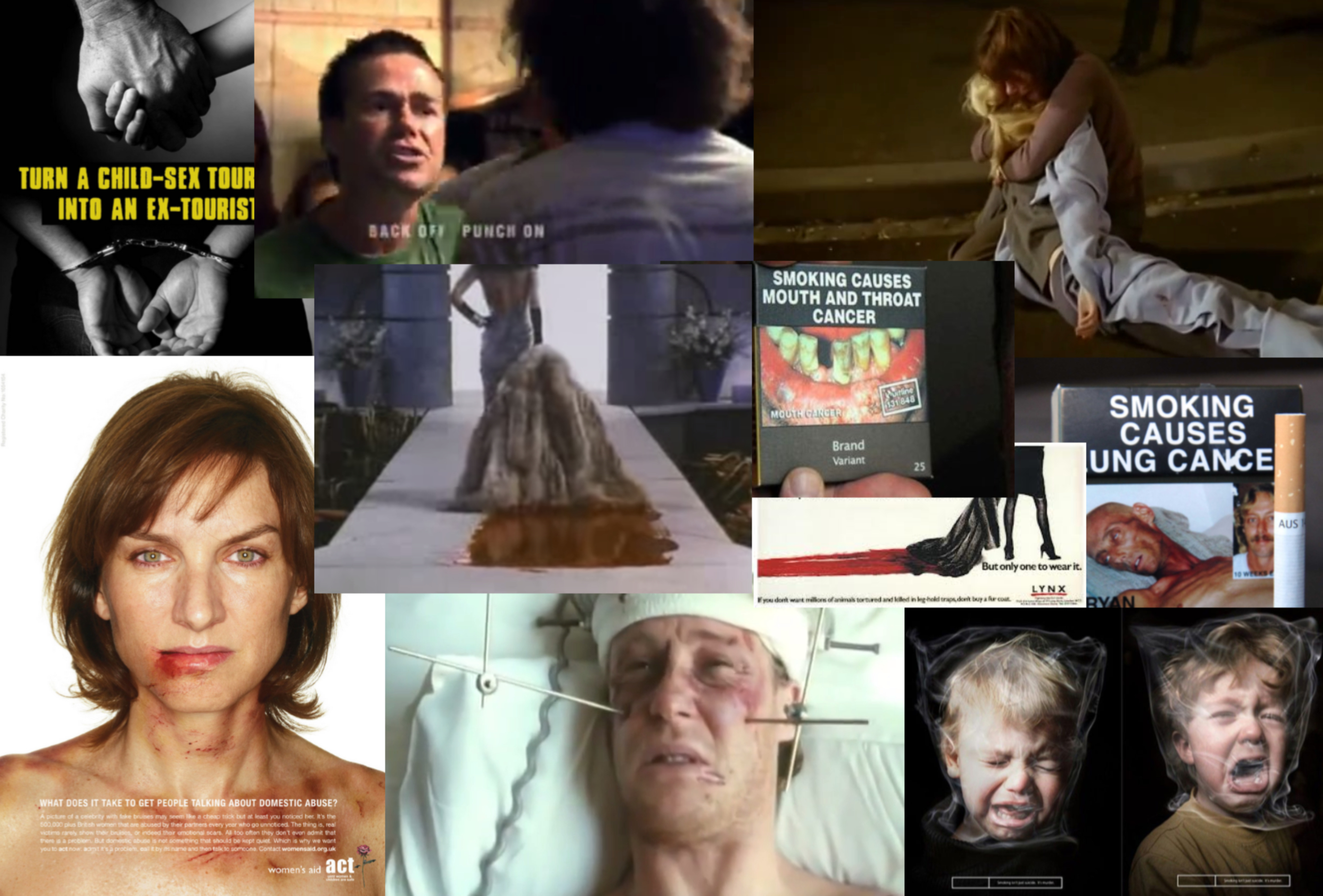 The Breaking The Brand team feels very privileged that more groups are contacting us to ask about the behaviour change models we use; from the start we have been very happy to share our techniques and ideas. So as more animal welfare and wildlife groups are looking at how to change user and perpetrator behaviour, we hope you find this blog informative.

There is a belief in many circles that all messages should be positive, don’t upset people, people only learn and change when they feel positive, are having fun and are engaged. This mindset is pervasive; it is naïve and just plain wrong.

If this were true, then from a media perspective why don’t anti-smoking adverts show happy people playing with their children and saying “I have much more energy to play with my kids because I don’t smoke” or road safety adverts with drivers saying “Home again safe and sound because I don’t drink and drive”. Do you think such adverts would reduce the smoking rate or the incidences of drinking and driving?  Do you think such adverts would have worked? No, me neither. The reality is, some people are motivated into changing their behaviour for positive reasons, but many need to feel discomfort to trigger them into action to do something different. This is used in the media to great effect.

I come back to the pervasive belief that positive messages have a greater impact (let’s remember they do with ‘some’ people, but not with ‘all’ people). As a result of this belief, in the education system, we see an ‘every child gets a prize’ mentality. In the workplace many HR departments and HR people want all professional development to be EnterTrainment. They are worried that people may get upset in a learning and development space; particularly if those people are senior managers. Similarly, many managers don’t want to have robust, performance management conversations with staff who demonstrate inappropriate behaviours.

As a business coach, who has been working in the area of behaviour change for nearly 20 years, some of my work is remedial. I am approached by companies who haven’t been able to turn around poor leadership behaviours, bullies, Machiavellians in the workplace. “Can you fix them?”, “Can you clean this up?”, “Can you make this problem go away?” is what is always implied and often stated.

When someone is demonstrating inappropriate behaviours you can point out to them the benefits and opportunities of behaving more positively within the workplace; this has nearly always been done before we are called in and sometimes HR has been trying to persuade the offending manager for many years using these positive, influencing techniques and it hasn’t worked.

In this instance, with respect and empathy, you have to make the manager conscious that there are consequences associated with their current inappropriate behaviours. Their reputation and brand has already been affected and if the behaviour doesn’t change will be affected even more. This will result in no further opportunities in the company – they have hit a ceiling and they may be exited from the company.  Choices and consequences are highlighted, risks to reputation and executive brand are assessed. Alternative behaviours are agreed on and tested; coaching continues to hold the person to account and help them make the new behaviour consistent. It works and it’s not rocket science.

When we think of behaviour we want people to change in our society; stop smoking, stop drinking and driving, stop domestic violence, stop alcohol fuelled violence, do we show people adverts highlighting how much better their lives would be if they stopped engaging in these risky and tragic activities? Unlikely, what we see is something much more uncomfortable. For example, who could not have been confronted by the image of Antiques Roadshow’s sweetheart, Fiona Bruce, made up as a victim of domestic violence? Or the Keira Knightley showing the same in the video: https://www.youtube.com/watch?v=AegdywmDZ60

Those of you who have been following Breaking The Brand for some time will know that from our interviews with the primary users of genuine rhino horn in Viet Nam only two reasons to stop using rhino horn emerged, health anxiety and status anxiety. When we consider smoking, the exact same reasons apply. 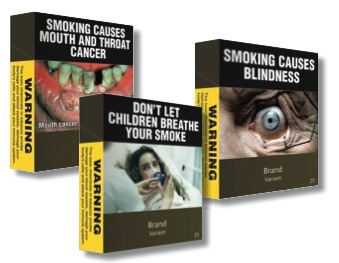 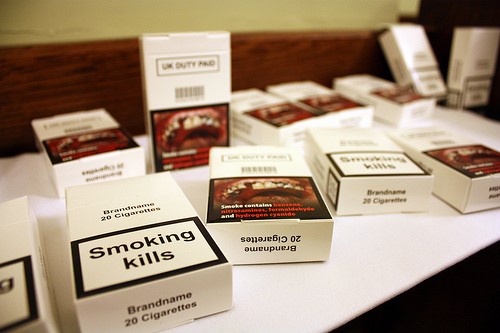 *From a smoking and status anxiety perspective smokers were first (r)ejected from offices and restaurants; and now 12 countries around the world are looking at plain packaging.

I remember over 25 years ago, one of the people I worked with had developed a 60 cigarettes/day habit when he was a pilot in the RAF. After leaving the air force, he constantly bemoaned the fact that he couldn’t kick his smoking addiction. We had popped out of work to get something from Gregg’s Bakery (those in the UK will know the chain) for lunch. When he started talking about struggling to give up smoking again, I reached over and pulled the shiny, gold Benson & Hedges packet out of his shirt pocket and tipped the cigarettes in to the empty Gregg paper bag. “What the f…?” he said before he realised what I was doing, then “I’m going to feel a bit manky pulling my cigarettes out of a paper bag”. “That’s the point” I replied. He kept using paper bags and dealing with the looks from strangers and the ribbing from friends, all of which triggered status anxiety. Within a month he had stopped smoking. Plain packaging 1980s style!

Breaking The Brand will continue to create adverts that target the ‘customers’ motivations to stop using rhino horn. Where as our first two RhiNo campaigns focused on health anxiety, informing the Vietnamese users about rhino horn infusion, our next campaign targets ‘status anxiety’; asking “What does a wildlife criminal look like?” 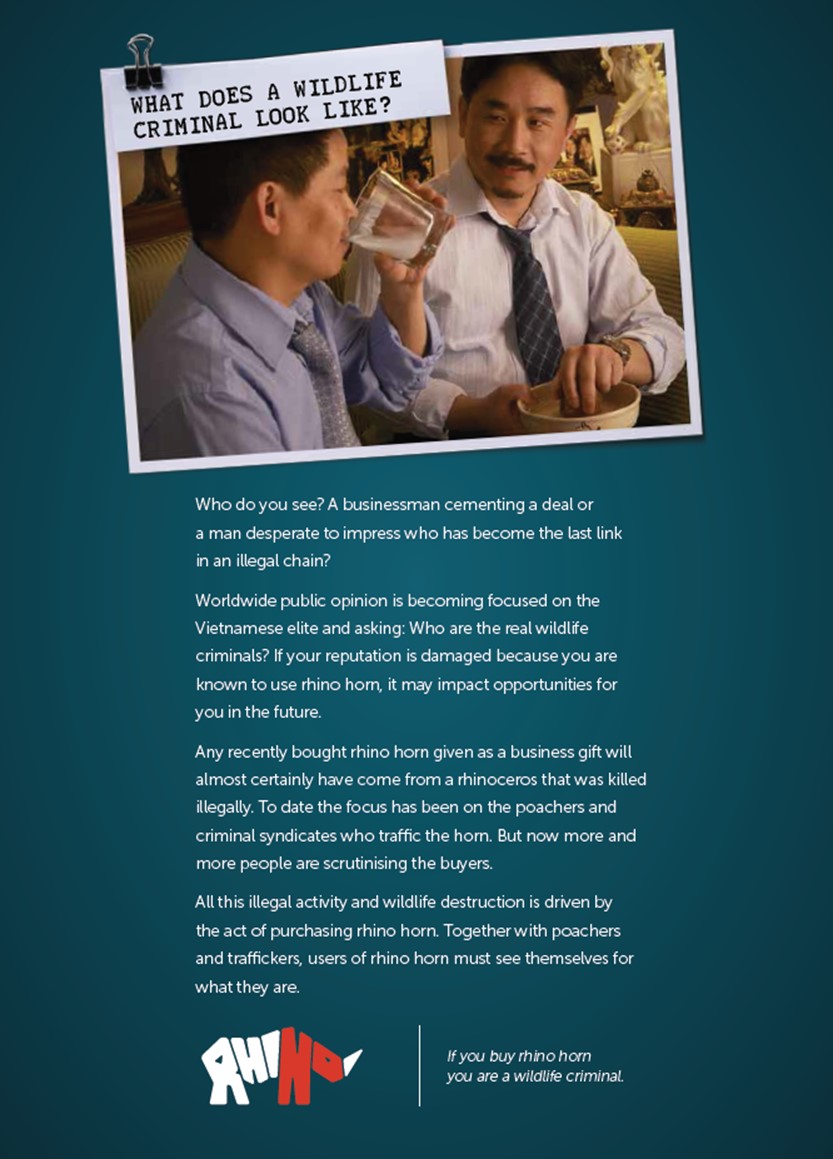 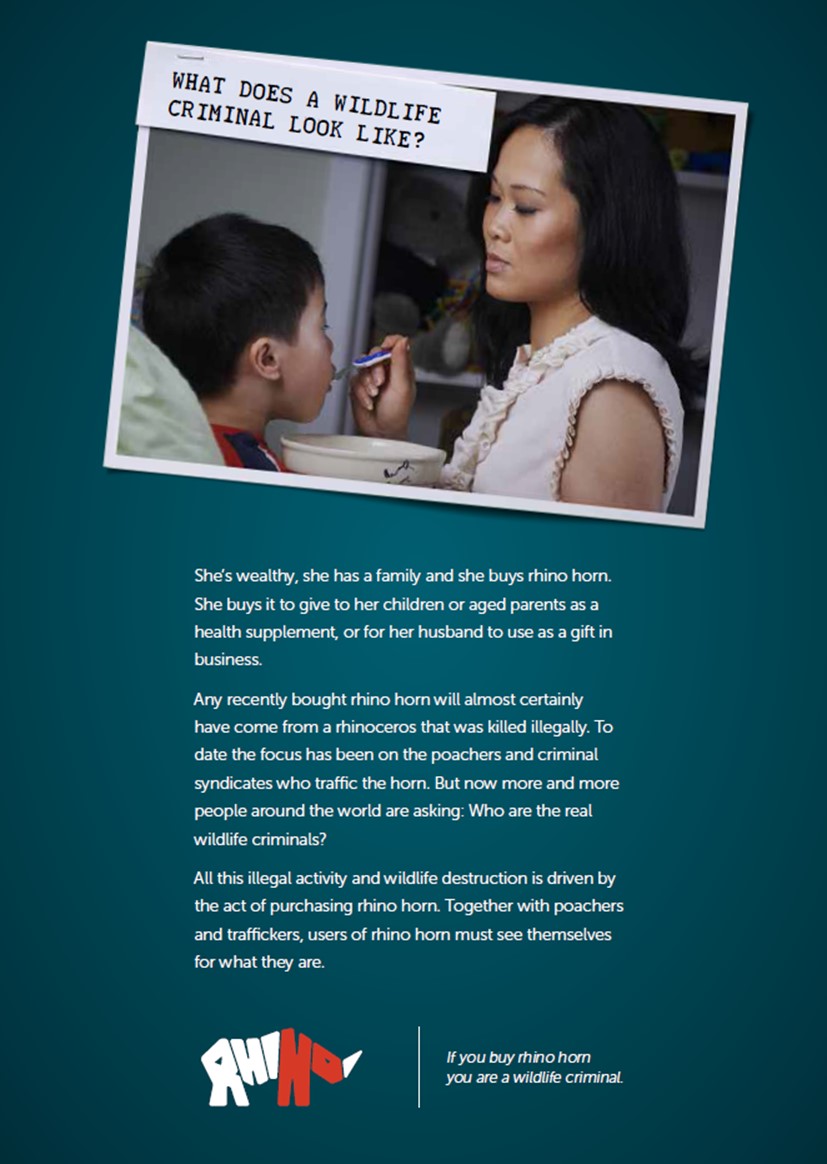 From day one Breaking The Brand has been incredibly lucky to have the pro-bono support of three of the doyens of behaviour change media, Nigel Dawson, Randal Glennon and Pete Becker: https://three-wise-men.com.au/  They have worked on campaigns targeting child sex tourism in Asia, domestic violence and rape, alcohol fuelled violence and workplace safety. Their acclaimed road safety campaigns have no doubt saved thousands of lives and tens of thousands of people from disability. All of these adverts trigger discomfort – just check out the road safety Christmas advert linked via image below. 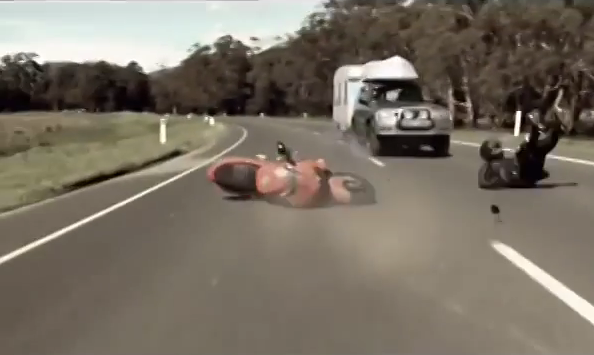 Since the launch of our campaigns we have had people in the rhino conservation space tell us what we do is ‘too hard hitting’, ‘racist’ and ‘would offend our donors’. From our perspective our adverts simply target the primary users of rhino horn in a way that triggers their motivation to stop.

So to those groups and organisations considering this type of campaigning, remember ‘some’ people are motivated by positive messaging (pleasure) but for others discomfort (pain) triggers behaviour change. This is especially true if you are aiming to reduce the incidence of an ‘undesirable’ behaviour. Also, please don’t hesitate to contact Breaking The Brand if you would like to bounce around your ideas. Good luck!