How Valid Is The Sustainable Use Model?

The accepted definition of Sustainable Use is:

In reality there is a massive amount of evidence of a long term decline in biodiversity, from WWFs Living Planet Report to the May 2019 IPBES Report which states that up to 1 million species are potentially facing extinction and confirmed that the trade in flora and fauna was the second biggest threat to species survival. It is obvious that species won’t be around to ‘meet the needs and aspirations of future generations’, but this is being conveniently ignored to satisfy the need for ‘economic growth’ and ‘global development aid’.

In relation to the global trade in endangered species, we lack any transparent evidence that the sustainable use model is working to conserve endangered species. Defenders of the model endlessly cite crocodiles and vicunas, but CITES lists nearly 36,000 species, not just those two. Evidence needs to be systemic, comprehensive and independently verifiable, none of which is currently the case. 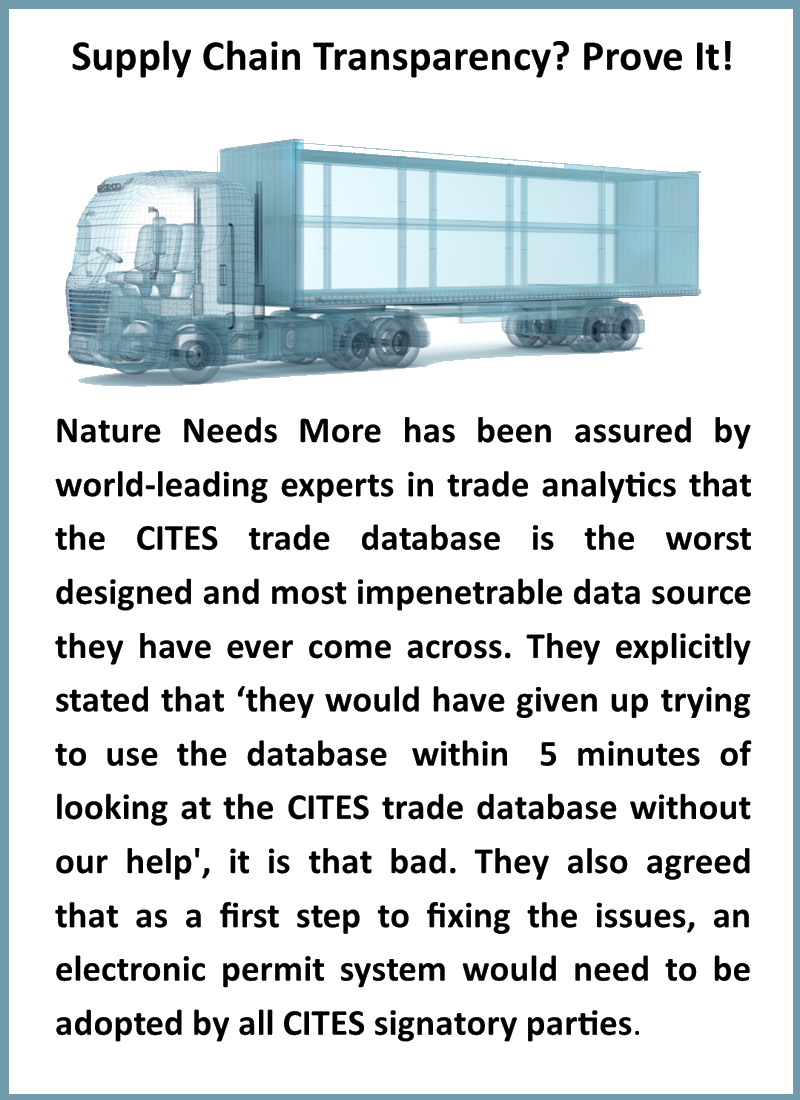 When attending CITES CoP 18 we observed that trade analytics for the legal trade in endangered species are not discussed. Participants talk about the sustainable use model as a way to conserve species, but no one actually acknowledges that this proof doesn’t exist. It feels very much like the situation highlighted by Dutch historian Rutger Bregman when he was invited to attend the 2019 World Economic Forum in Davos; whilst there he observed that there was only one panel at Davos dedicated to the topic of tax avoidance, “It feels like I’m at a firefighters’ conference and no one’s allowed to speak about water”.

At a CITES Conference of the Parties (CoP), you are at a trade conference that doesn’t talk about legal trade, trade analytics, legal trade risk flags. More broadly sustainable use is spoken about in terms of ‘principles’, ‘guidelines’ and ‘recommendations’ that business and industry use as the basis for self-regulation. These are closer to aspirations used for marketing purposes (some would say ‘greenwashing’ of the trade) rather than proper regulation and enforcement to ensure the current and future wellbeing of the wild cohort and the ecosystem in which it lives.

More information on this aspect of trade and be read via In 44 Years, CITES And IUCN Have Provided NO Proof Sustainable Use Is Working, CITES – The Trade System That Doesn’t Know What It Doesn’t Know and the Mechanisms of Trade

The May 2019 IPBES Report into the global state of biodiversity made it abundantly clear that our current patterns of extracting biomass from nature are unsustainable, with up to 1 million species threatened with extinction. The direct exploitation of plants and animals is the second biggest factor driving the extinction crisis, after land use (habitat destruction). Yet since its publication there has been no change in relation to the unrelenting focus on ‘sustainable use’ of wildlife. Even COVID-19 doesn’t seem to have been enough for the industries, businesses and governments desperate to nudge us back into pre-pandemic consumption patterns and business-as-usual to learn. The scale of the inertia is quite staggering.

Nature Needs More decided to dig deeper into the magical claims of the ‘win-win-win’ sustainable use model and highlight how the current institutional settings continue to preference economic growth over both ecological sustainability and social justice outcomes. Our Debunking Sustainable Use Report 2020 focuses on the international trade in endangered wildlife and how the lack of effective regulation under CITES and the tacit tolerance of the illegal wildlife trade combine to ridicule any claims of sustainability.

The story of ‘sustainable use’ starts from a fundamentally flawed assumption – that there can be a win-win-win scenario between economic, ecological and social benefits. Unlimited growth is impossible on a limited planet, so all ‘use’ of nature has to be based on managing the available ‘stock’ for current and future generations. This cannot be done under a capitalist model of private property rights over nature’s resources, it requires a commons management framework. We provide short, medium and long term solutions to reversing the present trends, which are currently driving the catastrophic declines in biodiversity. 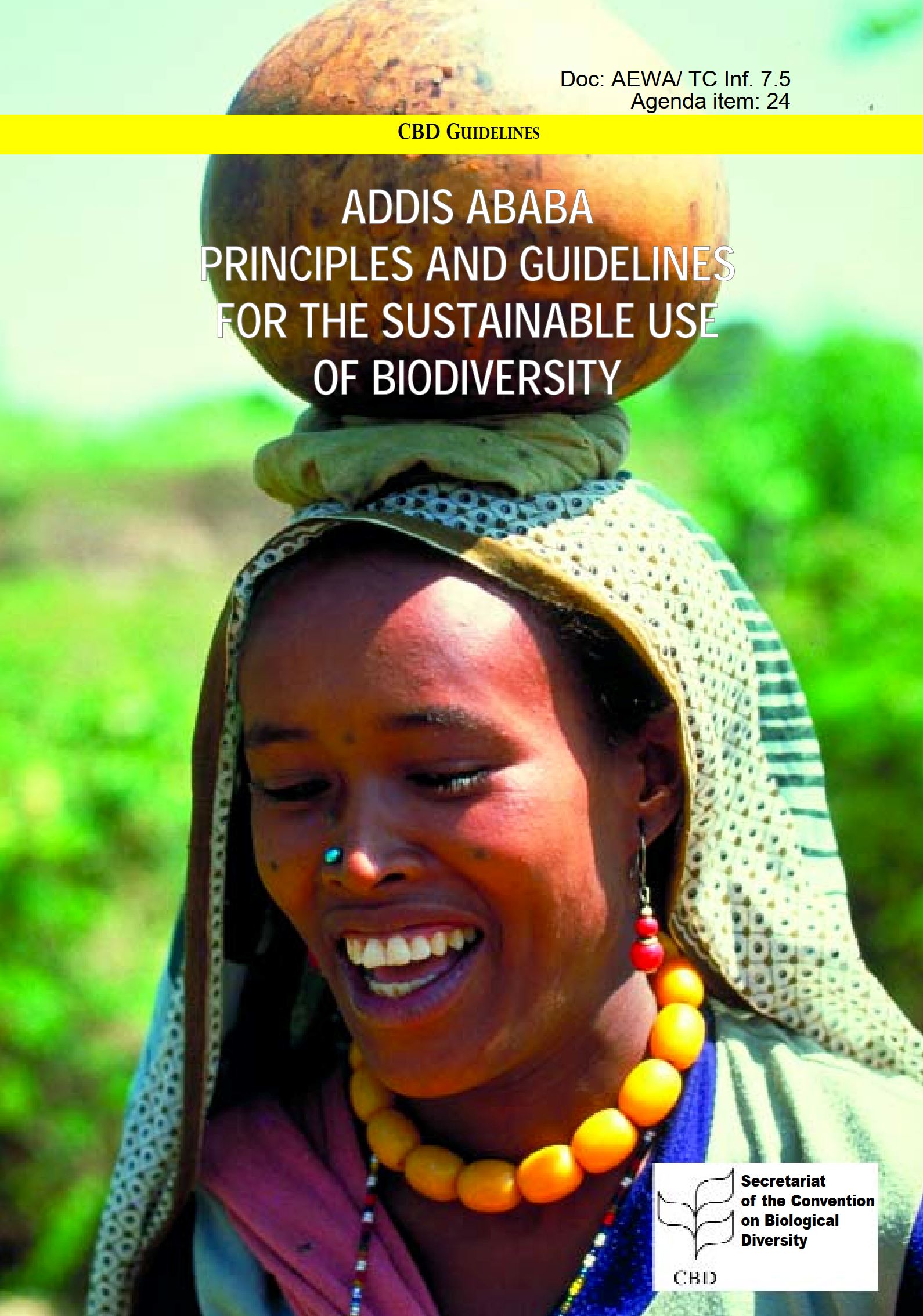 Created in 2004, the Addis Ababa Principles and Guidelines On Sustainable Use have yet to be fully factored into the CITES listing mechanism and non-detriment findings. This can only be done if CITES moves to white-listing species for trade by adopting a ‘reverse listing’ model. 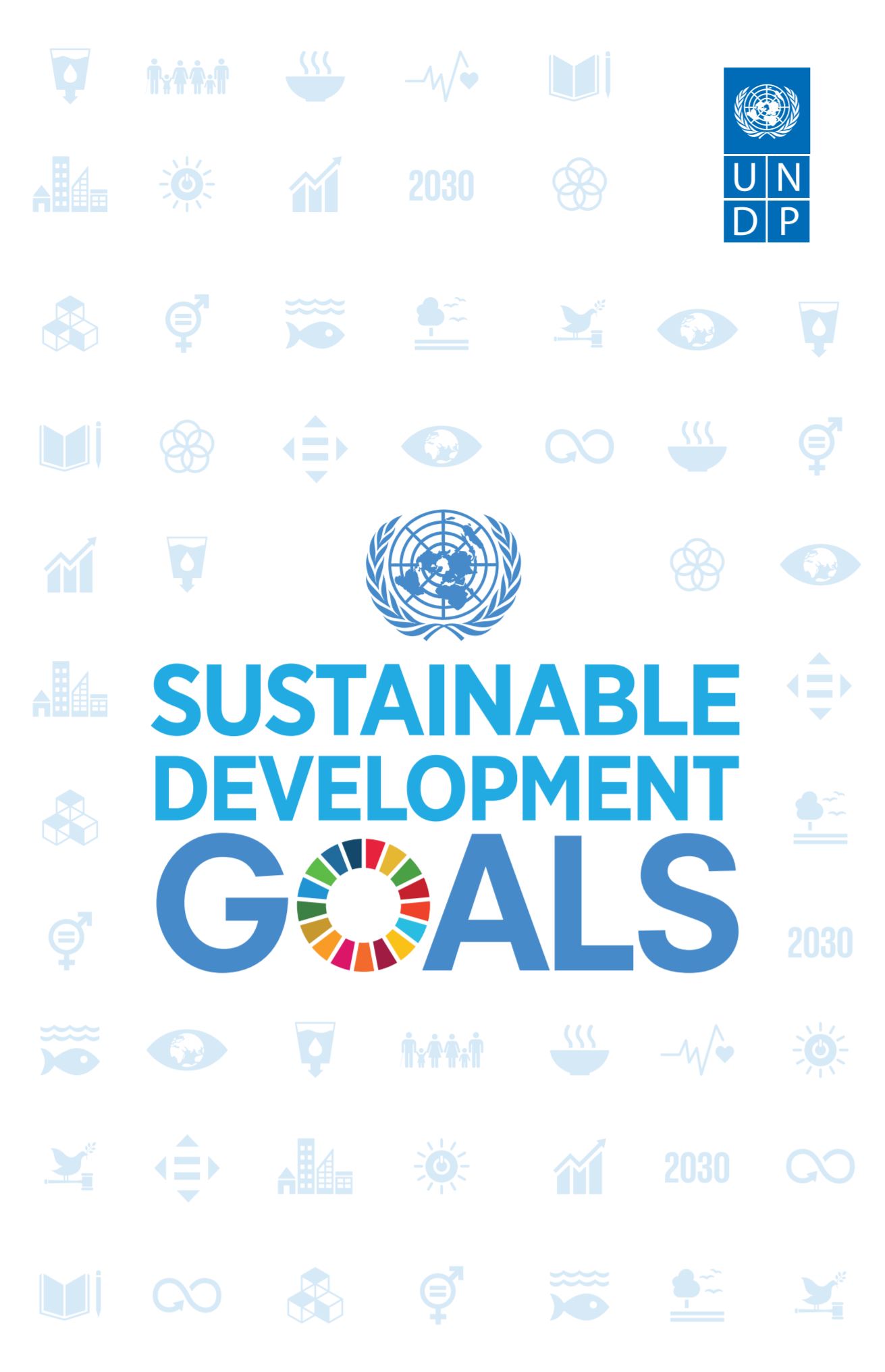 Undoing the Commodification of Nature

The commodification of nature can’t be undone without undermining a basic tenet of capitalism – unlimited economic growth. Given that the unfettered growth is no longer feasible with hard ecological limits to further growth, it is time to rethink this commodification. Trade is one aspect of this commodification and to address the continued biodiversity loss, the agencies and organisations focused on the trade in endangered species must be both commercial in their analysis of the trade and conservation minded in their assessment of its sustainability.

This focus goes beyond dealing with the rampant illegal trade, it sits squarely in the management, regulation and resourcing of the legal trade system. There needs to be definitive proof that the sustainable use model works for each and every species before trade is allowed to continue. This also means that sustainable use as a basis for global development aid needs to be addressed, as it further increases the pressure on wildlife and protected areas. The strategy of selling off endangered species solely as a means of poverty alleviation in developing countries cannot be ignored and alternative models, such as a Basic Income, must be considered.

Addressing unsustainable commodification also goes beyond CITES. Agencies that exist today to promote trade and sustainable use without being responsible for the consequences – such as the WTO, UNCTAD and the World Bank – need to have updated mandates that restrict such promotion and funding to cases where sustainable use and sustainable growth can be proven upfront and in conjunction with the regulator – CITES.

This further means fixing the glaring issues in the current CITES listing system. There are nearly 36,000 species listed under CITES for legal trade regulations, but we also know from research published in February 2019 that even when a species is identified by the IUCN Red List as being threatened from trade, the wait is on average 12 years for protection under CITES; and some species have already been waiting up to 24 years to be listed after first being named on IUCN Red List as being threatened from trade; during this wait species can be traded freely. These non-CITES listed species are covered by more general trade agreements, such as Free Trade Agreements (FTAs) and as a consequence of multilateral FTAs the WTO. As early as 1994 the Committee on Trade and Environment (CTE) was created within the WTO; the CTE has a broad mandate – from the WTO website “it has contributed to identifying and understanding the relationship between trade and the environment in order to promote sustainable development.”

As a 2016 European Parliament report states “The wildlife trade is one of the most lucrative trades in the world. The legal trade into the EU alone is worth EUR 100 billion annually”. This same report highlights that the WTO is one of the organisation considering this trade and states “Under WTO rules additional checks and regulations are permitted in cases where trade could negatively affect the environment.”  [Again, from the report]: Although the WTO primarily acts as a regulatory framework to facilitate international trade, the WTO formally accepts that exceptions to free trade rules are very important in environment related issues. In 2015 CITES and the WTO produced a joint statement agreeing that that the well-being of economies, habitats, and societies are inextricably linked.

Currently, for example the WTO is involved in the negotiation of the Environmental Goods Agreement. This negotiation, of 17 WTO members (Australia, Canada, China, Costa Rica, the European Union and its 28 member states, Hong Kong, Iceland, Israel, Japan, Korea, New Zealand, Norway, Singapore, Switzerland, Chinese Taipei, Turkey and the United States), is the largest goods market access negotiation underway in the WTO. While NNM acknowledges that the Environmental Goods Agreement is not specifically about endangered species, it begs 3 questions: