The Art Of Distraction 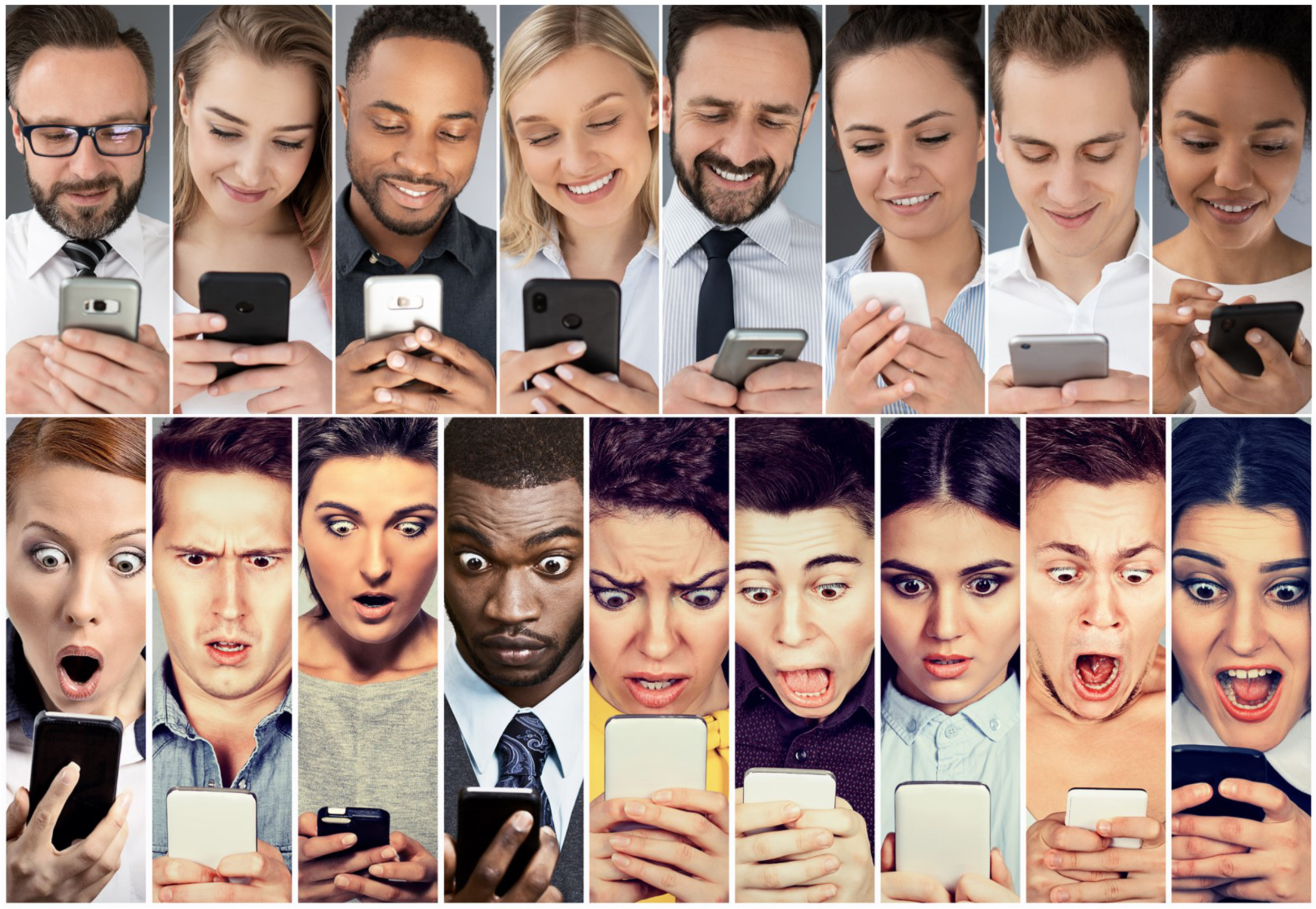 As with the IPBES report published 2 years ago, the recent IPCC report is a stark reminder that we are heading into a much less livable world, not just for humans, but for most living species. With the release of both reports (and the many others that have the same conclusions) we need to be honest that the result is nothing has been actioned. The question is why?

As governments, industries and businesses blame each other and wait for the other to do something, this ongoing blame game undermines the collective action needed. Those who should be shouldering the blame have perfected the art of distraction. Like the magician they misdirect the eye and give themselves another term in office or another profit cycle before they must invest in misdirecting again.

Whilst each of us, in rich countries, must shoulder some blame, due to our addiction to consumption, it is important to be aware of the massive budgets that go in to keeping us addicted and pretending that we can continue to consume for now (and forever). The nature of capitalism demands economic growth, while all effective actions to address climate change, and biodiversity loss, demand the opposite – degrowth.

Instead, the strategy has been to distract us from the lack of effective action by focussing on ‘pretend actions’. Governments distract us with announcements, announcables, pledges, international agreements and new policies on paper. And there is the thing, most of these never leave the page, they are only on-paper, rarely in-action. G7 or G20 pledges are hardly ever enacted; they don’t have to be because nobody follows up anyway. Most announcements disappear in the endless media cycle, providing a short ‘feel good’ factor and are then conveniently forgotten by all. Even international agreements such as the Paris Agreement, for Climate Action, or the Aichi Agreement, for Biodiversity Protection, see little actual follow-through. None of the Aichi 10-targets were achieved. Current pledges (not actual policies), under the Paris Agreement, amount to a trajectory for 2.4 degrees warming, not 1.5 degrees Celsius. 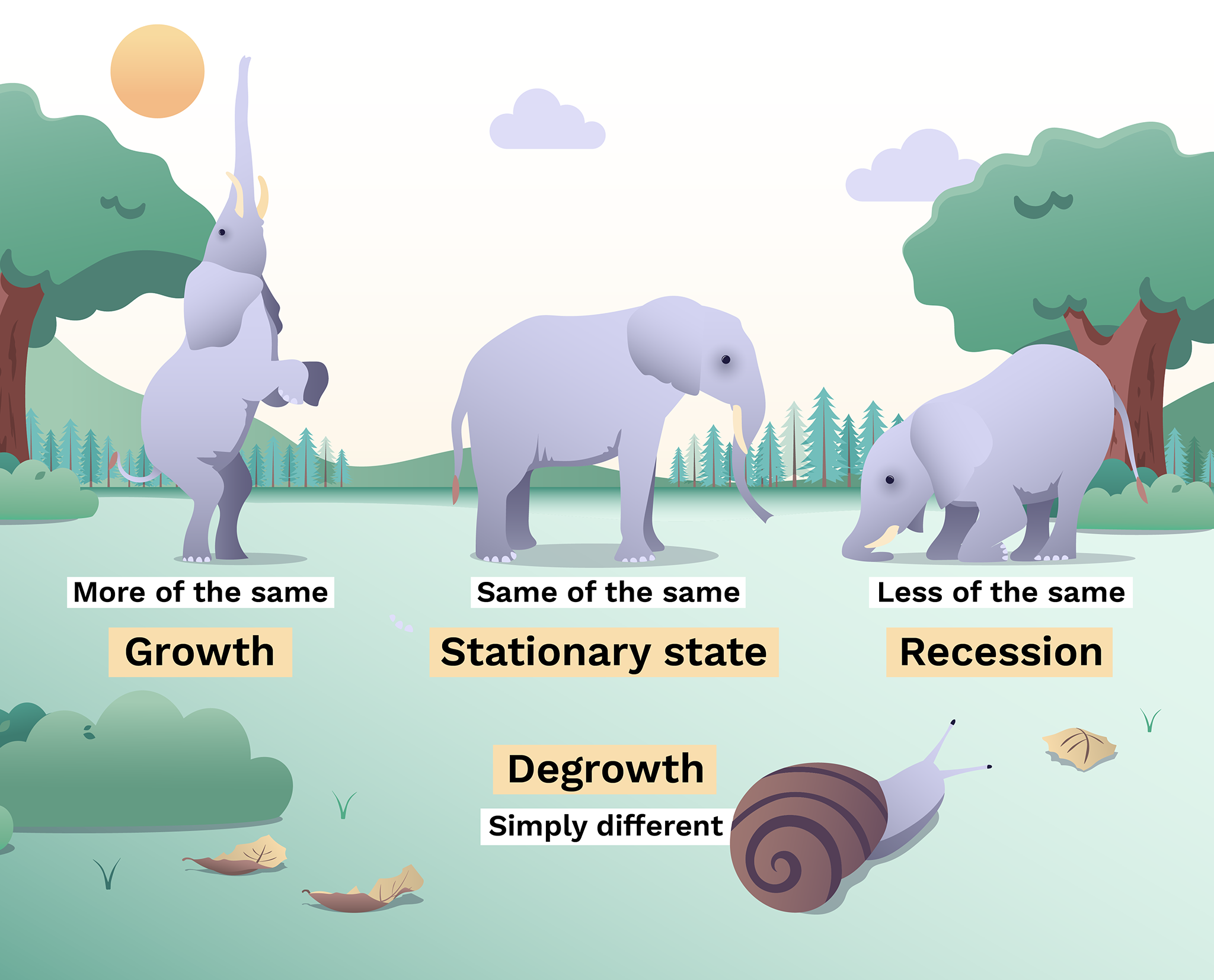 Similarly, business and industry distract us with corporate social responsibility, multi-stakeholder initiatives, pledges, pacts, forums, certification schemes and glossy sustainability reports. All of this again makes for great announcements and keeps plenty of PR firms in business, but it has not resulted in any effective action. Most certification schemes are ‘self-certification’, ‘voluntary compliance’ or compliance is not independently monitored. CSR and sustainability reports have proven worthless over the last 3 decades. Multi-stakeholder initiatives have been found to be ineffective after a comprehensive analysis conducted recently. Pledges, pacts and forums appear to be no more than elite networking and PR opportunities than any attempt at serious action. Companies are in the business of making profits, not saving the world. Believing anything else is buying into these distractions.

Businesses let themselves off the hook by publicly calling on governments to adopt policies, whilst lobbying in secret against any policies detrimental to profit or growth. Governments have for 40 years taken a hands-off approach with business, saying that the ‘free market’ will fix everything and there is no need for them to be prescriptive. Together, business and government, have created an illusion of an ‘effective’ system, whilst basically doing nothing that would impede growth or profits. This has left us feeling powerless, with seemingly no one to turn to, to get effective, timely action to at least avoid the worst possible scenario (the complete collapse of industrial civilisation).

Of course, this outcome has been engineered, the art of distraction comes with a big budget for marketing and advertising purposes. But the budget is worth it because it is still infinitely cheaper than dealing with the problems outlined in the IPBES and IPCC reports. So, governments and business have been willing to cover the costs of distraction, that has enabled inaction and a business-as-usual approach for the last 30 years.

Biodiversity loss and climate change weren’t inevitable, they have been hidden in plain sight for decades. The Australian government is not on its own using the ‘technology, not taxes’ mantra. But there is little evidence that government will invest directly in such technology. Australia was the world leader in solar technology in the 1950s and 1960s and successive governments didn’t invest. The technology needed to protect us from the worst of climate change has been available at scale for two decades, with no commitment made to a ‘technology led solution’. Let’s remember Jimmy Carter installed solar panels on the roof of the White House, during his term in office; and one of Ronald Reagan’s first actions as President was to have them removed in 1981.

Because of the inaction over this time, there are now no solutions available to bring humanity back to the ‘old normal’. All we have available is adapting to the ‘new normal’, which means accepting the levels of uncertainty we have reached and demanding action to mitigate risks.

Some of the billionaire investors, who have created great wealth under the ‘old normal’ have realised globally we have reached a point of inevitable change. They are already mitigating their risks by investing their time in understanding how civilisations rise and fall. They know it is in their best interests to understand what happens at the end of an old cycle and the start of a new one.

Just one of these billionaires is Ray Dalio, an American investor and co-chief investment officer of the world’s largest hedge fund, Bridgewater Associates. Dalio, whose personal wealth is US$20.3 billion, is currently publishing an online book: The Changing World Order.

Reflecting on the studies of the rise and fall of civilisations, Dalio has built on the work of Oswald Spengler, Arnold Toynbee, Nikolai Kondratiev and more recently Peter Turchin, looking at the ‘economic waves’ or ‘secular cycles’ recuring every 150 or so years. 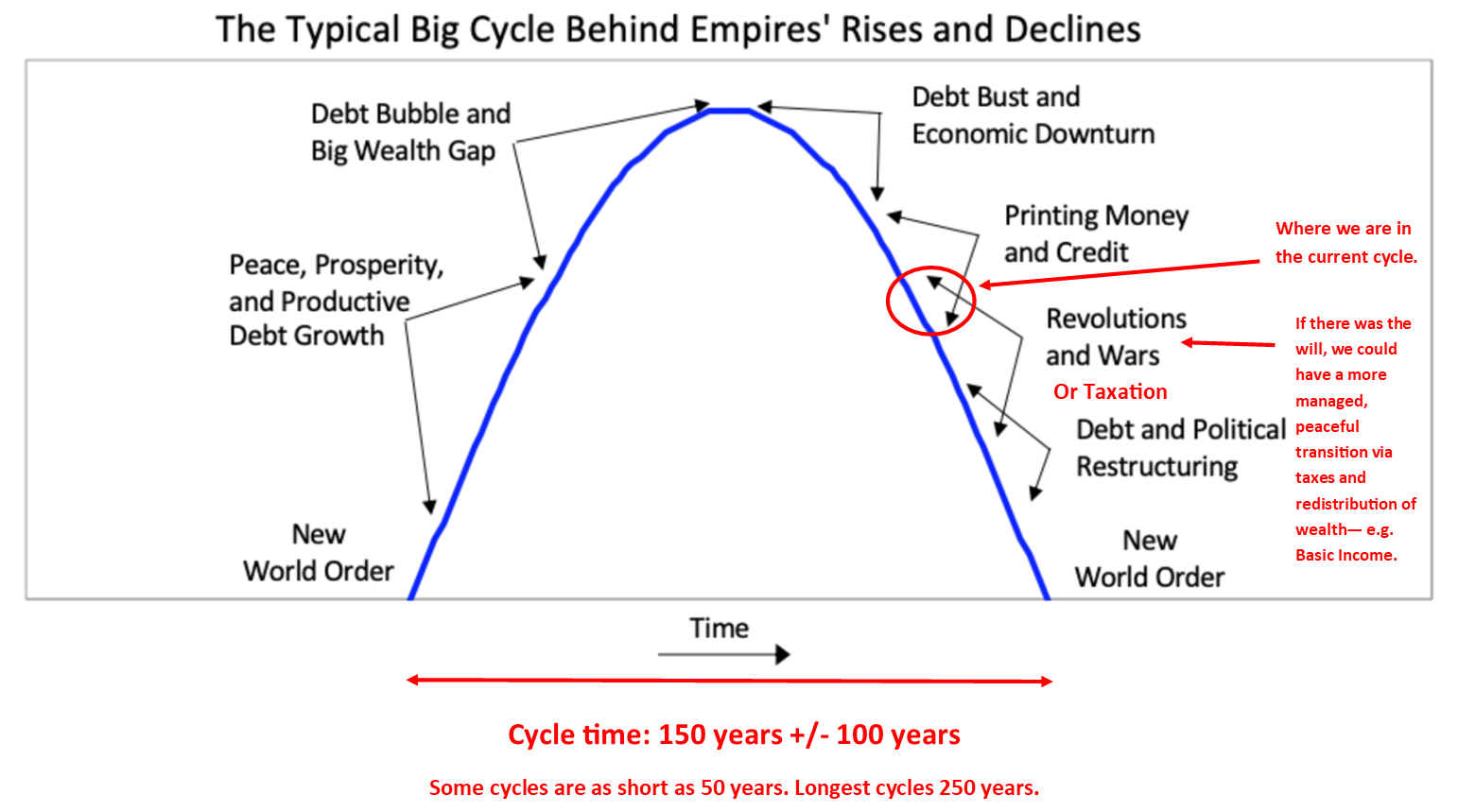 Dalio presents the cycle in a graph (Nature Needs More has added the comments in red), depicting the typical progression from the initial period of prosperity and productive debt growth, to debt bubbles and then violent conflict before another new order emerges. These cycles tend to last around 150 years, and have been identified by Turchin and Dalio in historic England, France, Russia, Rome, China and the US.

By ignoring biodiversity loss and global warming, we  are accelerating to the end of the current economic cycle and model. What is shocking is how few people realise this is where we are, and how much worse things can get in the medium term (20 years). Maybe with the scale of this summer of wildfires in Canada, the USA, Greece, Italy, Turkey, Algeria, Tunisia, Lebanon, and the truly massive fires in far Eastern Siberia we will finally demand action from governments? 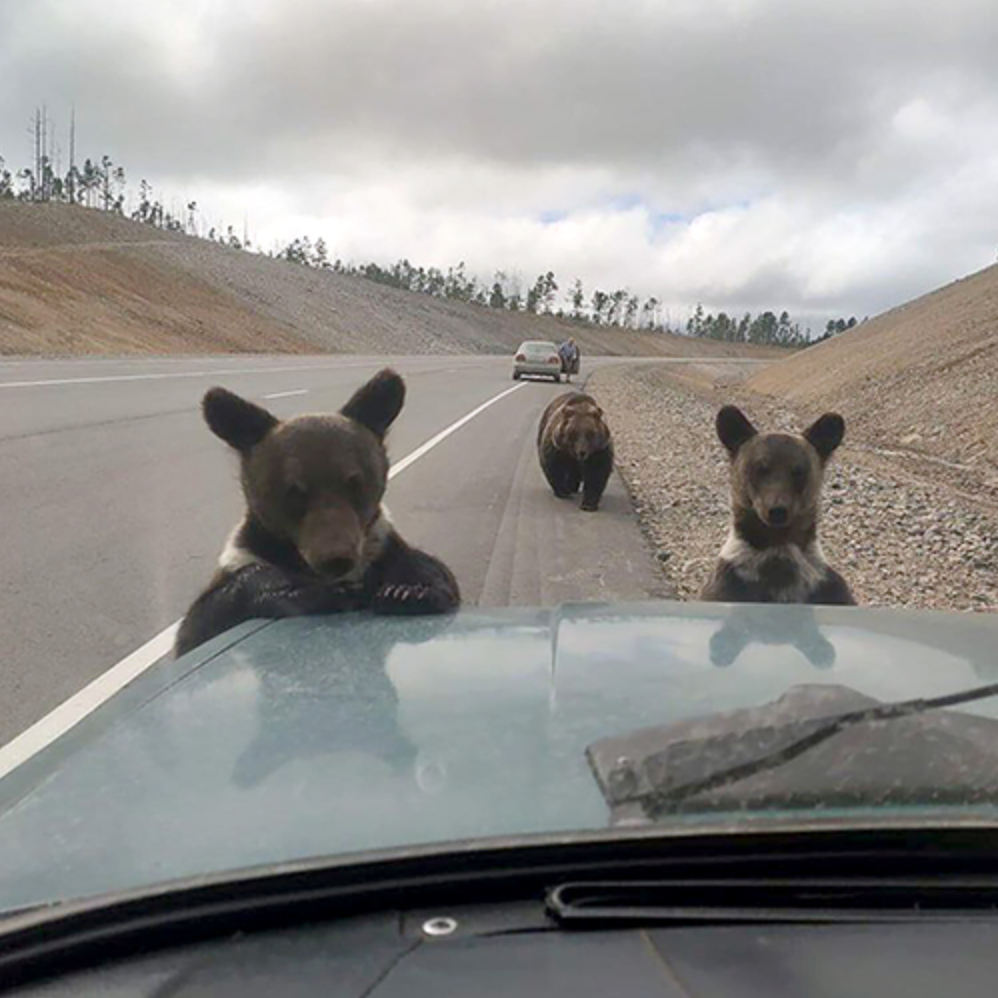 Together with damage to vegetation, we know from the recent giant Australian wildfires how many animals and birds were estimated to be lost. In Siberia, there have been reports of bears on the motorways looking for food, as their habitats, and food source, have been devastated.

All this because we have been complacent in being distracted. Too many in the rich countries can’t reign in their spending, can’t reign in their carbon intensive lifestyles. So, the distractions suit us just fine, they briefly alleviate the fear and anxiety about the future. They alleviate our guilt of the mess we have created and are leaving for our children and grandchildren to deal with. This is no solution though, not even a band aid. The future looks grim and the ‘new normal’ will be scary unless we start investing in mitigation and adaption measures now, while we still can.

And most importantly, if the only way to achieve this peaceful transition is that we significantly reduce our consumption levels, and slow down and simplify our lives, to reduce our carbon footprint, will be do it? We can’t say we don’t have a choice.

The science is settled and the picture it draws of our future is stark; we have to demand effective action. But we can only do this by refusing to be distracted by governments and business. The question now is, ‘do enough of us have the resilience to accept the levels uncertainty we have reached, and finally demand the very real action needed to mitigate risks?’

I would say only time will tell, but the problem is we don’t have the luxury of time.