The Men Who Could Save The Rhino

There is a group of men in the world who have the potential to influence the primary users of rhino horn, driving the current rhino killing spree, to change their consuming behaviour. These men probably don’t know that they have the power to do this and, even if they do, it is critical that they understand how. 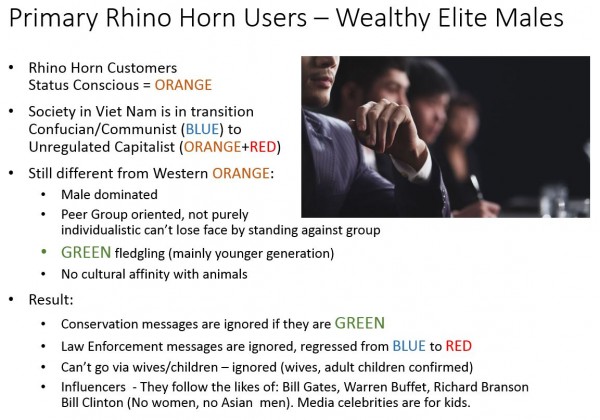 In 2013, when I started interviewing the wealthy Vietnamese men living in Hanoi and Ho Chi Minh City, who are considered the primary consumers of rhino horn, I asked them who the people are they like to read about and follow. The pattern that emerged was that they followed and were influenced by the same global male business and political celebrities that business people worldwide follow; the specific names mentioned unprompted included Bill Gates, Barack Obama, Richard Branson, Warren Buffett, Bill Clinton.

During the same interviews this group confirmed that they were NOT interested in:

You can read more about this research here.

When I asked the interviewees why they were interested in the men they named, it was because of their perceived power, status, success as leaders and how influential they were. These global business and political celebrities had a brand and a reputation to aspire to. 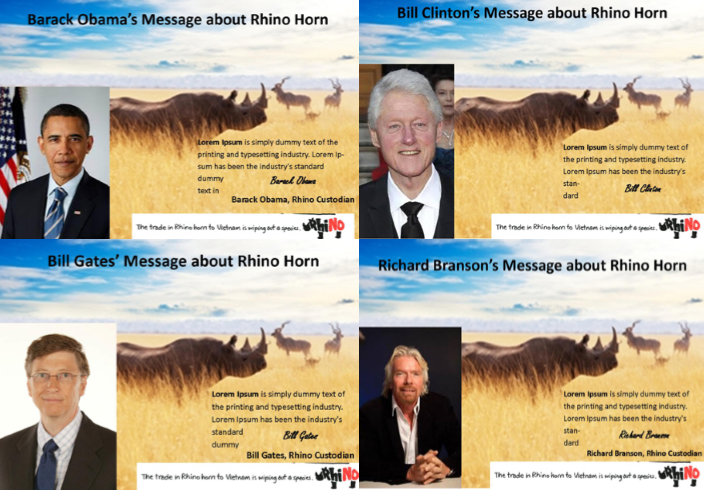 So, in parallel with raising money for our 2014 pilot campaign, I designed what the BTB team called our ‘Dream’ campaign, which I outlined in an October 2014 blog: Giving up rhino horn to be accepted into a higher status group.

These men are not easy to make contact with for a little volunteer run organisation in Australia, but we have persisted and used the angle of a leaders reputation, brand and competence in our adverts and campaigns since 2014.

The elite male users of rhino horn in Viet Nam suffer from ‘status anxiety’, they fear rejection by the groups they aspire to be a part of. As a result of this desperation to belong, they become mediocre leaders, pale imitations who can’t succeed on their own skill and merit, so they prop up their opportunities with gifts and status symbols of rhino horn.

BTB has highlighted this leadership shortfall and reputational risk in our campaigns, in articles published in the English language press in Viet Nam, and in letter writing campaigns targeting key businessmen in Viet Nam. In all of these we have we highlighted the importance of reputation and brand, including the many quotes of Warren Buffett, one of the men our rhino horn using target group could be influenced by. 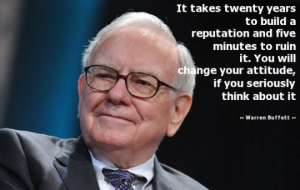 This select group of men really could have the power to trigger behaviour change in the primary rhino horn user group in Viet Nam. The users are likely to give up rhino horn if this group of global business and political celebrities asks them to. But this request must be in the language of leadership, reputation and professional success; not showing them biting their finger nails. So, we ask these individuals to lend their status to keeping rhinos safe in the wild.

We now have joined forces with an amazing young artist, who cares passionately about animals and the natural world, Nayana: http://www.lobokingofcurrumpaw.com/

Some of you many know Nayana’s work already. In April 2016 he was a finalist in the UN/CITES World Wildlife Day 2016 poster competition, the youngest finalist and the only Australian finalist out of 300 entries. His collection highlights the men and women who risk and lose their lives protecting endangered species.

When Nayana contacted Breaking The Brand he told us that he wanted to use his art to trigger demand reduction in the illegal wildlife trade and he wondered how this could be done for rhino horn. We are delighted to be working with this passionate and talented young man.

Nayana has brought his incredible talent and Breaking The Brand has contributed our research and knowledge of the users of rhino horn. As a result, Nayana is in the process of creating his next series, which he launched a preview of last week at a TEDTalk in South Dakota. Breaking The Brand is able to bring you a sneak peek of some of Nayana’s preliminary work. 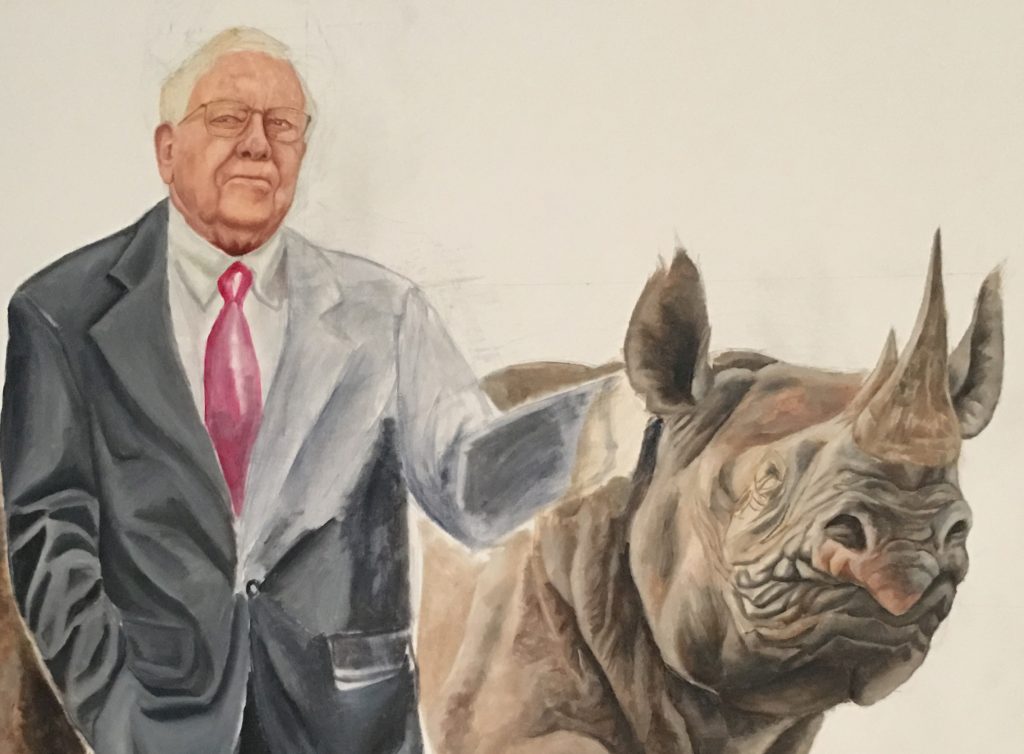 His new collection includes Warren Buffett, Barack Obama, Bill Gates, Richard Branson, Elon Musk, Bill Clinton. With this collection we ask this global political and business elite group to stand together with wild rhinos. We ask them to send messages to the rhino horn users that they can influence. These messages should highlight: 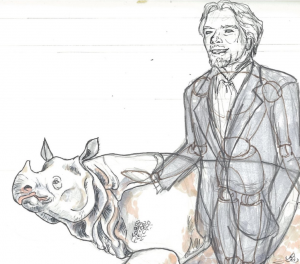 As Richard Branson stated in a recent 60 minutes interview “I think that fact that I can pick up the phone to nearly anybody in the world and get through, I’m dammed if I am going to waste it, waste the position I find myself in.”

We are excited to be working with Nayana in the coming months to support him bring this project to fruition.

And we ask Richard, Warren, Barack, Bill, Elon etc to pick up the phone to influential men in Viet Nam to ask for their help in consigning the practice of destroying rhinos for conspicuous consumption to history. We ask for their support to break the brand of rhino horn in Viet Nam and save this wonderful creature from extinction in the wild.