Trade Legalisation – A Greedy Person Is The Poorest Person In The World. 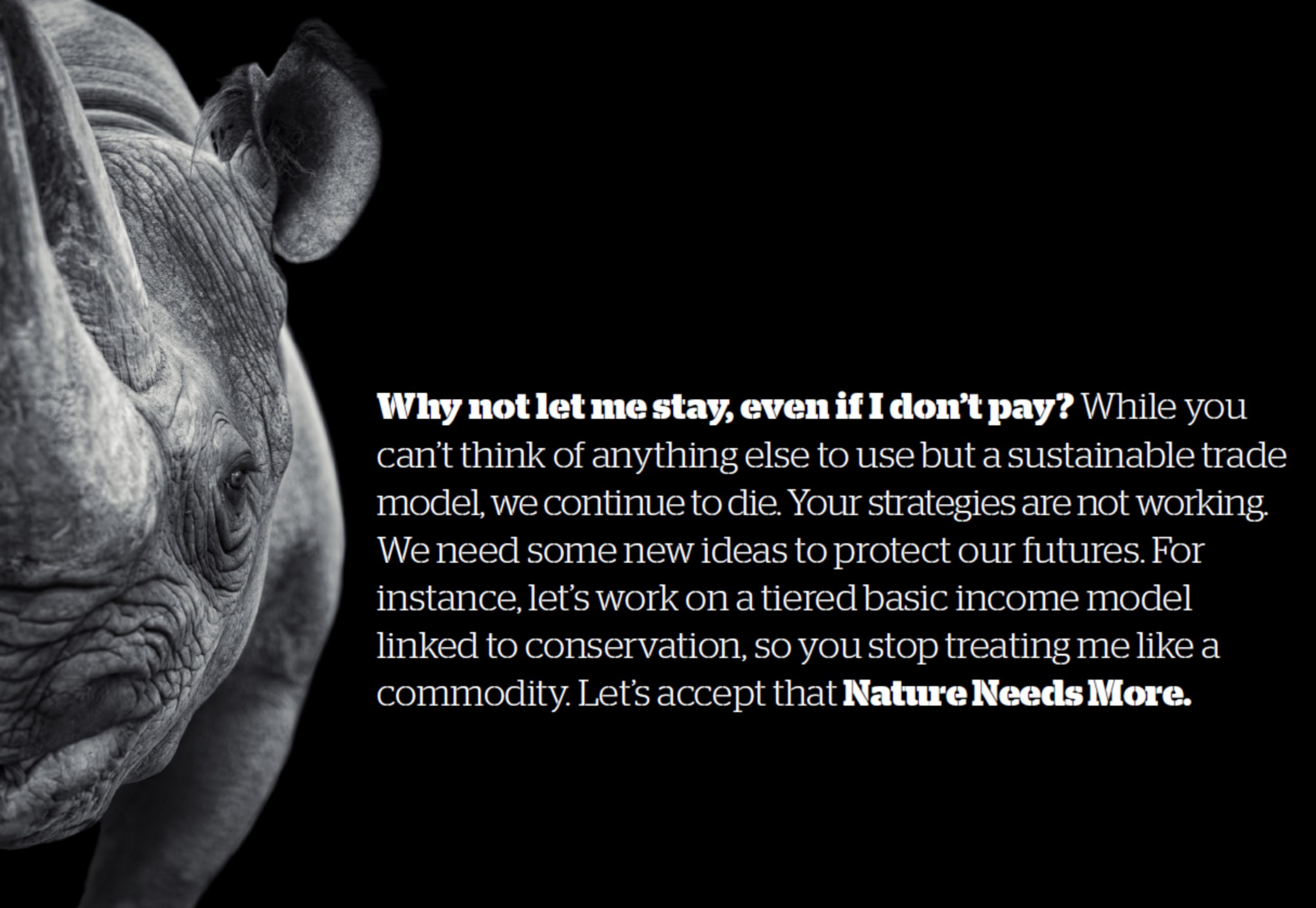 What is troubling is how easy they got it, with little resistance from large conservation, international agencies or governments. While there has been a lot of ‘noise’ there hasn’t been much substance to the arguments put forward. Most discussions have been ideological and, while there is nothing wrong with that, they are not enough. I am sure that they feel that there has been a lot of behind-the-scenes diplomacy, but it seems they were played.

As someone who has been observing systems and cultures for a couple of decades, what I see is a conservation system that has become stable and sustainable but not useful in solving present day wildlife trafficking problems. The problems have evolved over the last two decades, the skills have not. Are we seeing another Kodak Moment?

We know this is a difficult challenge, you just have to read some of the statements of the pro-trade players to know that. A couple of statements from Izak du Toit, a lawyer representing the rhino owners and listed on pro-trade website Rhino Alive as one of their ‘Experts in the Field’  http://www.rhinoalive.com/rhino-trade-experts/ tells you what you need to know.

In one article du Toit stated: [If the domestic trade ban was overturned] “We would sell [rhino horn] to the poachers to prevent them from killing rhinos,” What can we read from this astonishing statement? All you can take from this is that they will sell horn ‘legally’ into the domestic market to people who can afford to buy. What happens after that they don’t care about and isn’t their problem. They got their money by selling it legally in a domestic market. Several of the buyers I spoke to in Viet Nam said ‘I trust my South African supply chain’, so it doesn’t seem hard to smuggle it out of South Africa. South Africans and people around the world would be completely naïve to believe that South Africa’s border is not porous and that the rhino horn permit system can’t be subverted. I wrote more on this in a December 2015 blog: https://natureneedsmore.org/see-clearly-the-implications-of-south-africas-domestic-trade-in-rhino-horn/

Du Toit made another statement in: https://www.nationalgeographic.com/animals/article/160523-rhino-horn-ban-south-africa-cites-smuggling-john-hume-rhino-ranching-swaziland From the article: Du Toit acknowledges that rhino horn will have to be smuggled from South Africa to Asia in order to find a market, but that smuggling, he says, if it is of horns taken from live rhino, would be a reasonable form of civil disobedience in light of a CITES ban that has failed to protect rhinos. “I’ve compared it to apartheid,” he says. “Black people had to transgress the very law they objected to in order to show it was illegal.” So the pro-trade legal representative compared the groups ‘civil disobedience’ in smuggling rhino horn to Asia to South Africa’s black citizens breaking the law to show apartheid was illegal. As a reminder, du Toit was one of the Hume teams legal representatives working on overturning the domestic ban on rhino horn.

Annette Hübschle in her comprehensive 2016 report: The Game of Horns (Transnational Flows of Rhino Horn) cites numerous examples of private rhino owners being willing to supply the illegal market. Given that there is a body of evidence to say that a percentage of private rhino owners are legally and morally corrupt, the South African government has effectively handed this group a way to subvert the CITES ban on trade. How they have done this is outlined in the following articles:

All financial gain, no responsibility!!! And they say that this is about saving rhinos.

So, given how blatant this has all been for years, why hasn’t large conservation been able to counter these arguments with anything other than, in the main, general ideology. Is it because:

What Large Conservation Needs to Prepare for Next

Large/mainstream conservation organisations may have demonstrated they have little influence with governments, so what do they need to prepare for next in the pro/no-trade debate?

As I mentioned in a January 2017 blog: https://natureneedsmore.org/is-mainstream-media-contributing-to-the-rhinos-demise/ if I was pro-trade, my next step in trying to legitimise my pro-trade strategy would be to commission and fund research, to be done at some of the top universities around the world, on the trade question. This has already started, one university conducted research on traditional Asian medicine users in Viet Nam and concluded that the responses they received may indicate a basis for a legalised trade. I am not sure how they came to that conclusion given the average income of the people interviewed was less than USD $300 per month, whilst at the same time the paper stated that the cost of rhino horn is USD $28,000-100,000/kg. This is like basing sales projections of LVMH handbags on interviews with people on welfare – it’s simply rubbish science. If the large conservation organisations don’t have the capability or nous to pick apart these agendas, then they are of limited use to the rhino.

These are the views of the author: Dr. Lynn Johnson, Founder, Breaking the Brand