The Massive Trade in Endangered Species 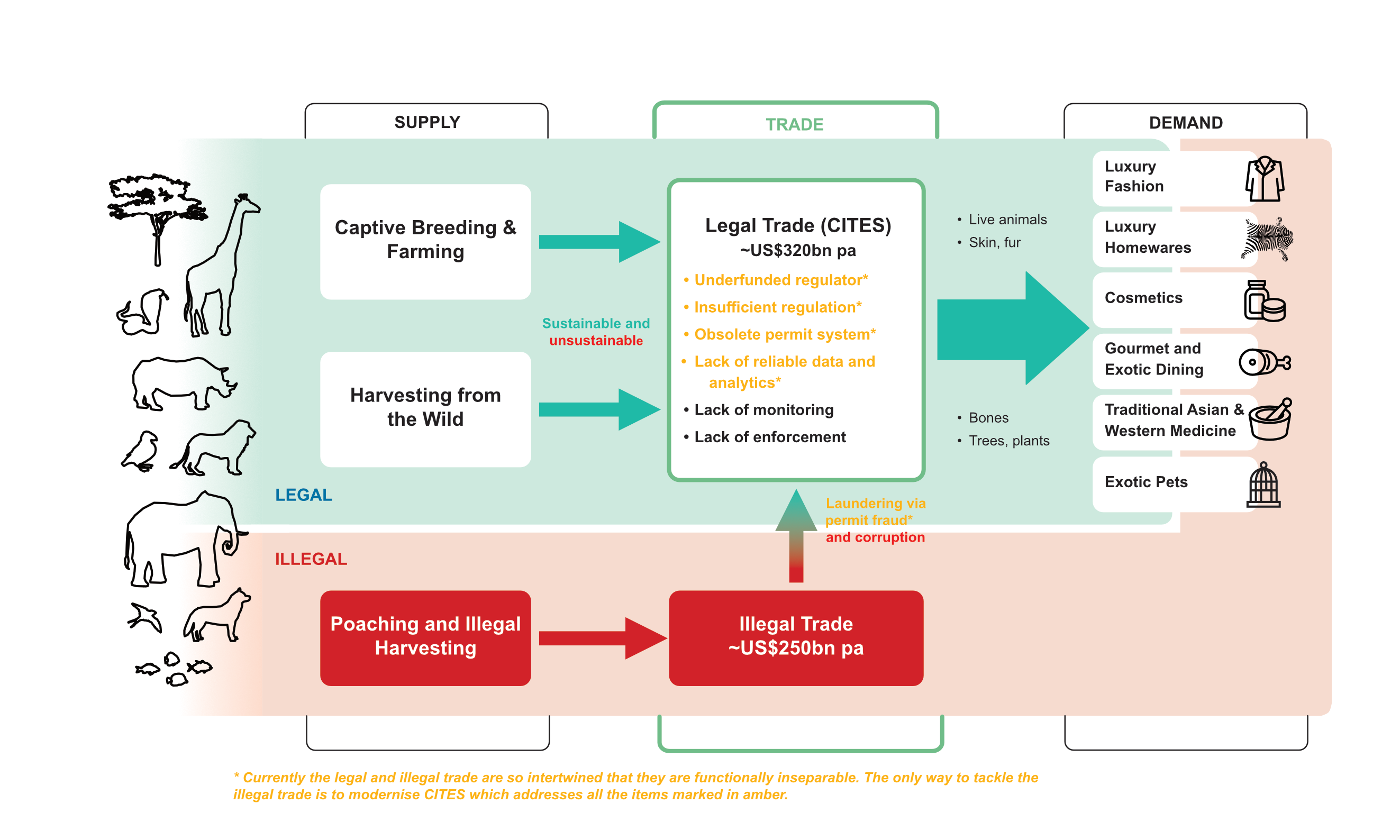 The diagram above illustrates the massive trade in endangered species, which is regulated by CITES. The keys to understanding the growing extintion risk associated with the unsustainable exploitation of nature for trade are:

The Need for Change

CITES has been in place for over 44 years and has had only 1 review of its effectiveness, which was 25 years ago in 1994. The compliance with CITES rules and appendix listings relies on a 1970s paper-based system of permits that cannot be reconciled with customs records at present or cope with modern day levels of trade. For these and additional factors, Nature Needs More asserts that it is impossible to decisively tackle the illegal trade in endangered species until the legal trade system is modernised to 21st century standards.

A 2012 UK parliamentary report estimated the value of the the legal trade in flora and fauna under CITES to be worth US$320 billion annually. Similarly, a 2016 European Parliament Report states:

“The wildlife trade is one of the most lucrative trades in
the world. The LEGAL trade into the EU alone is worth
EUR 100 billion [US$112 billion] annually.”

The value of the trade in flora and fauna together with permit fraud and the lack of real-time reporting and inability to reconcile this 1970s paper-based, stand alone system enable massive abuses of the legal trade system by wildlife traffickers. As a result, the illegal trade is now estimated to be worth up to US$258 billion annually, which means the illegal trade could be valued at 80% of the value of the legal trade; again demonstrating how ineffective the CITES permit and trade monitoring system is in reality.

Whilst any organisation that wants to reduce trade volumes or stop a trade in a particular species is challenged to provide evidence-upon-evidence-upon-evidence to back up their concerns and requests, CITES, IUCN SULi and others aren’t held to the same standards to provide proof that trade via the sustainable use model is working. And they can’t, because there are no useful or reliable trade analytics from 44 years of CITES operation. 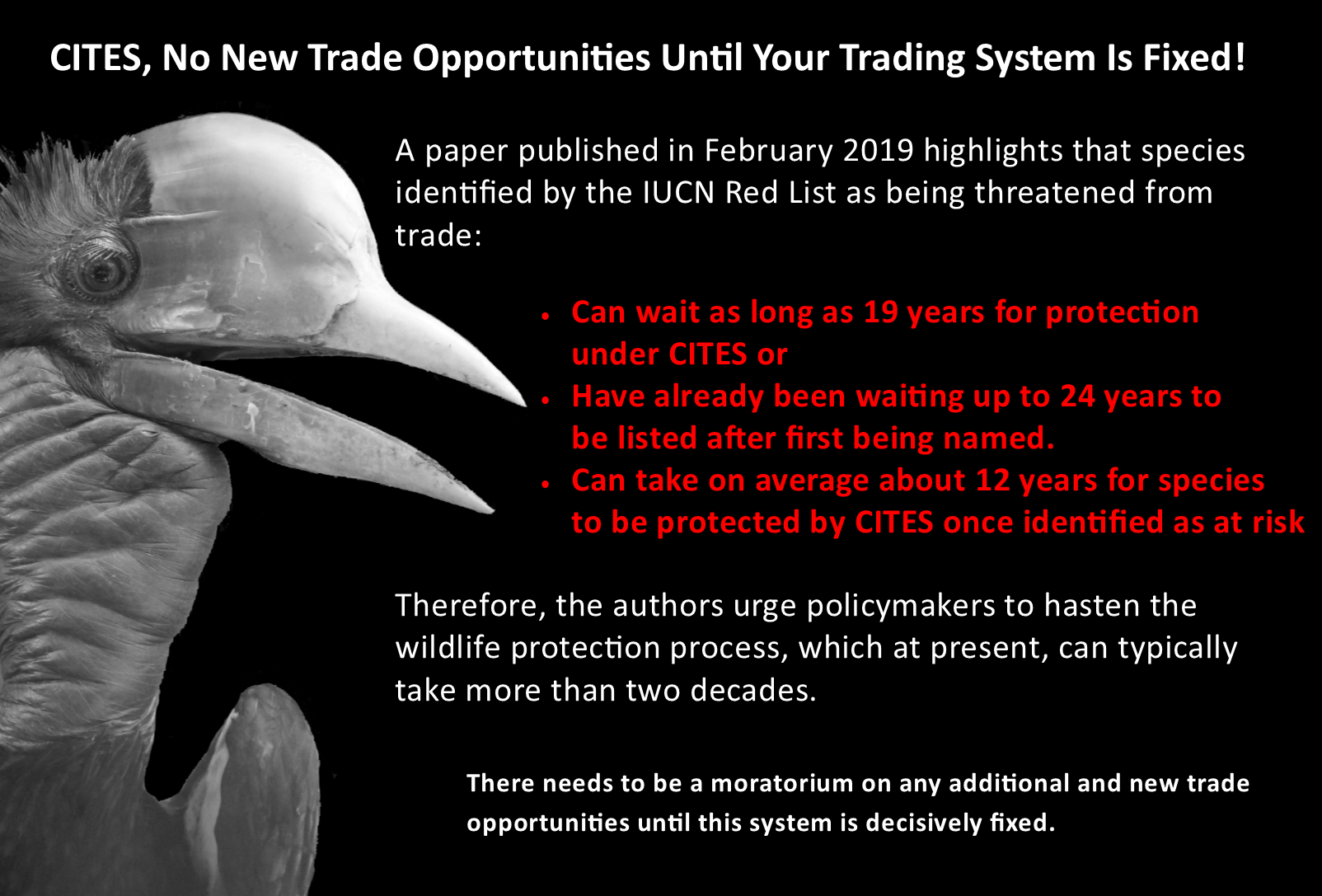 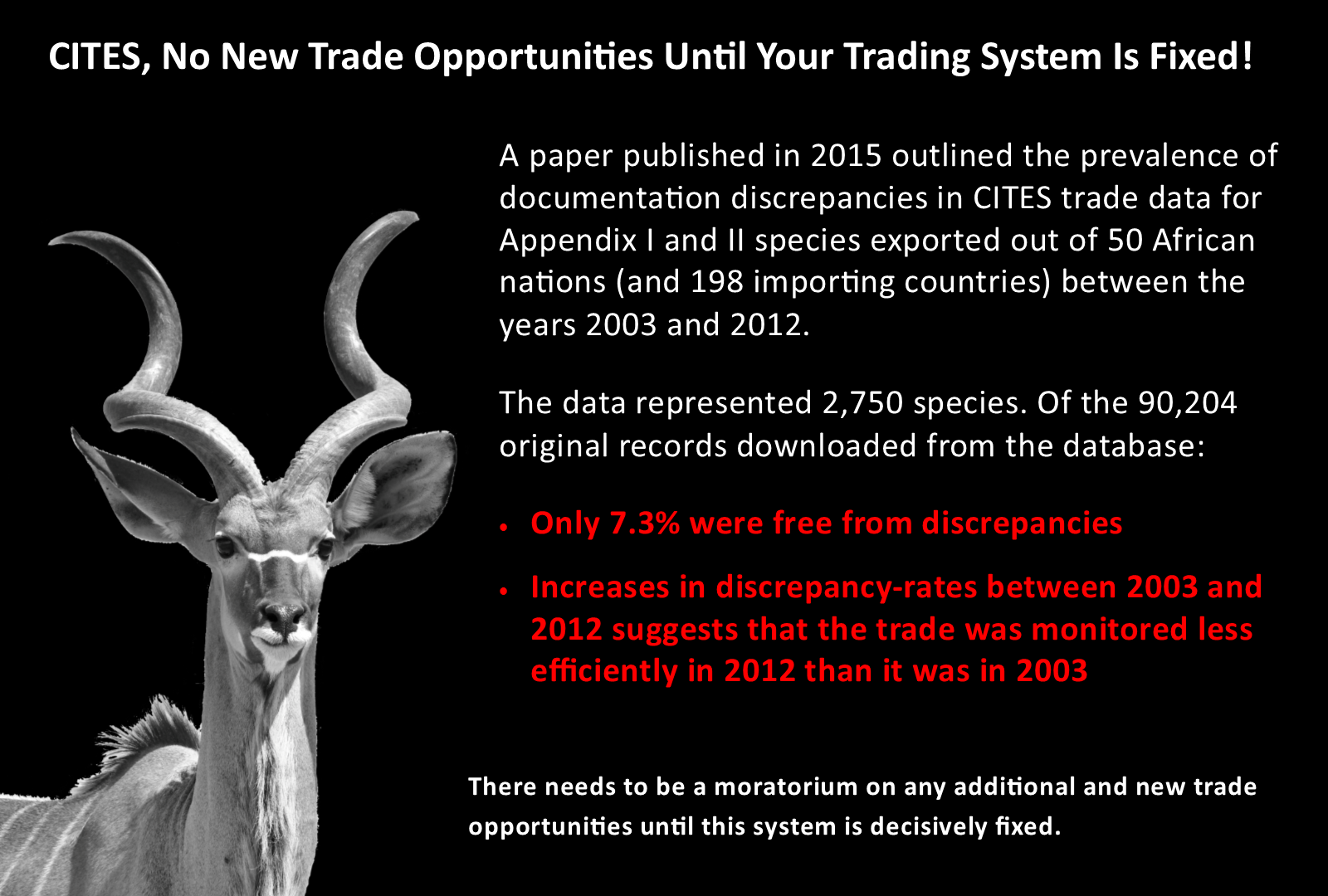 More information can be found in Nature Needs More blogs Ensuring CITES is Relevant and Effective, CITES – The Trade System That Doesn’t Know What It Doesn’t Know and CITES Signatories, Time To Show Leadership, Before It’s Too Late.

What is interesting is that, in effect CITES can provide no evidence that the legal trade system is working; it doesn’t appear to apply the ‘evidence-based’ approach mantra to itself that it pushes on any organisation that wants to reduce or stop the trade in a particular species.

In addition, the annual core funding for CITES is only US$6.2 million and the convention CITES now lists over 38,000 species for trade restrictions on Appendix I and II, making identification and verification at customs an impossible task for purely practical reasons. With potentially 1 million species heading for extinction in the near future, the current listing mechanism is bound to break down completely.

As a result, Nature Needs More initially proposed a 3 Step process to modernise CITES.  At the core of these proposals are changes to the articles of the Convention to a ‘reverse listing’ model first suggested by Australia in 1981. Under this system CITES would list only the species that have been approved for trade based on a thorough and ongoing assessment of the sustainability of such trade to ensure it will not negatively impact the wild cohort or the eco-system it lives in.

A brief overview of these original proposals can be found in the 3 short documents below. Based on these proposals and the feedback we received from over 100 CITES stakeholders we have since created a detailed blueprint for reform – please see the next section. 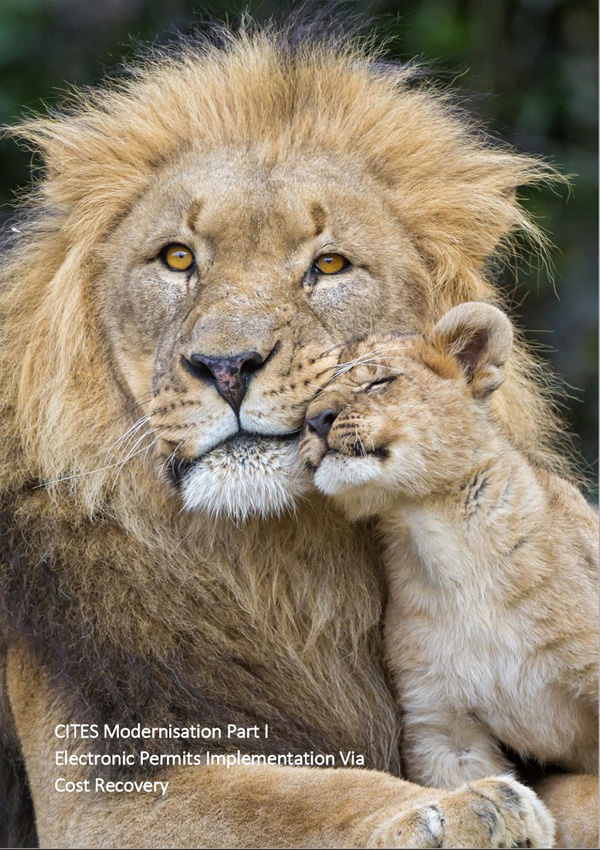 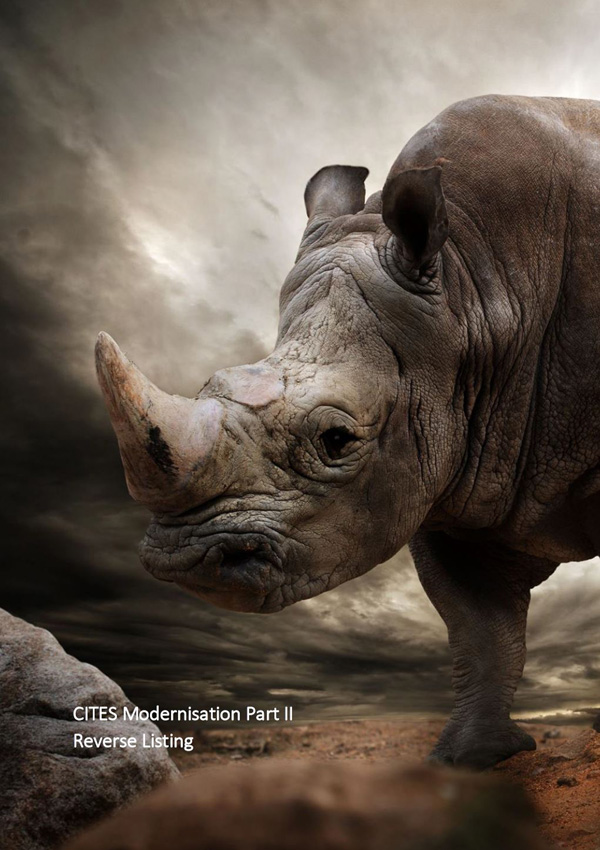 A Comprehensive Blueprint for Reform

We received many requests for a more detailed blueprint for how the new CITES framework based on white-listing and industry paying the cost of regulation would actually work. When the first draft of the CBD post-2020 global biodiversity framework was published in early 2020, it included a new target (Target 5) which stated that all trade in wild flora and fauna should be legal and sustainable. It was then that we decided to create a detailed framework based on this target.

This meant that we had to design a detailed regulatory mechanism that can cope with a large number of listings for trade and a very diverse range of businesses involved in the trade. We adopted the basic white-listing model from the European Medicines Agency, which is a supra-national regulator for the trade in pharmaceuticals in the EU. The EMA has a proven model for dealing with a large number of products being traded, for managing complex applications and approvals and for working with natonal authorities. It also publishes a detailed fee schedule which we adapted for use in CITES to make the system financially viable and to remove the current inequities.

The main difference between the regulation of pharmaceuticals and the trade in wild flora and fauna is the level of concentration in the businesses involved. Pharmaceuticals are dominated by just a handful of giant manufacturers whereas the CITES trade is much more diverse. We therefore adapted the ‘joint application’ model from the ECHA (which regulates the manufacture and import of chemicals in the EU), which solves this problem and has been proven in practice.

From these building blocks we created a detailed framework and investigated how it would work in practice based on a number of different trades (pythons, corals, rosewood timber). We further outlined detailed transition arrangements from the current to the new framework.

The resulting Modernising CITES report was published in July 2021 and is available in all 6 official UN languages. Nature Needs More is actively working with CITES signatory countries and NGOs to promote the new regulatry framework. We aim to get CITES to create a working group to study our proposal at CoP19 in 2022 in Panama. 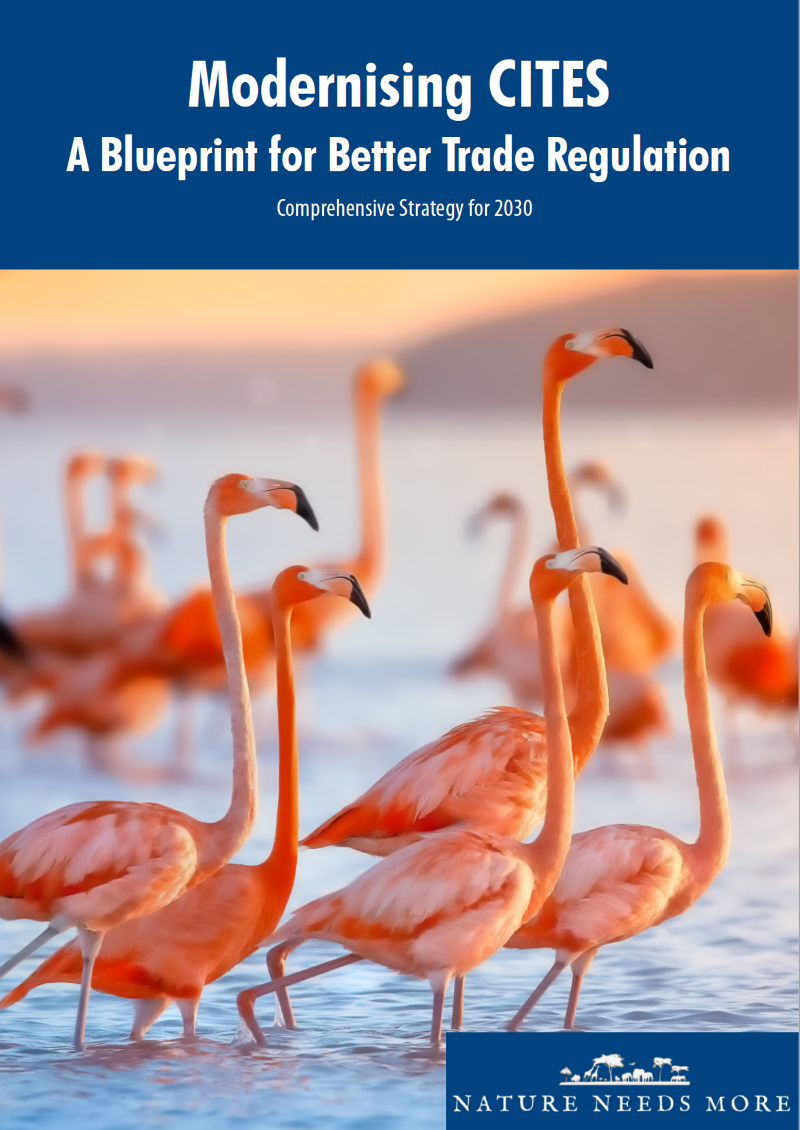 The Modernising CITES report is also available in Arabic, Chinese, French, Russian and Spanish. Please go to the Reports Page for download.