Would You Let Your Home Decay Around You? 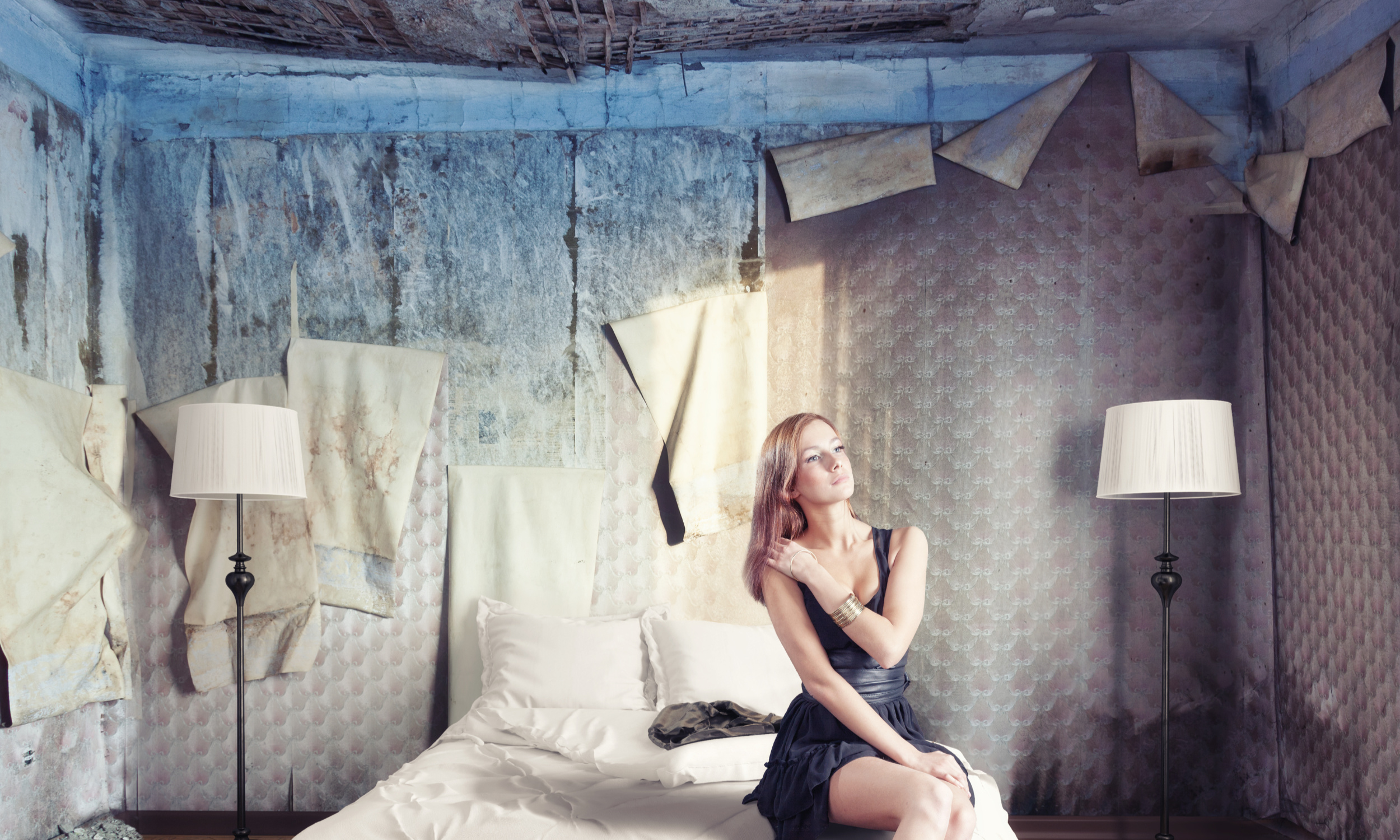 Would You Let Your Home Decay Around You?

As rational animals we believe we wouldn’t live in a home obviously decaying around us and not do something about it if we could. But this is exactly what we have done, and continue to do, with the only real home we have. The interesting question is why we can compartmentalise what we do so easily.

An example of this compartmentalisation became apparent in the recent Australian federal election. Many of the suburbs who voted out Liberal Party MPs, in some municipalities for the first time in the party’s history, did so because they wanted action on climate change. Yet many of these same wealthy leafy suburbs are the worst offenders when it comes to cutting down mature trees to extend the outdoor dining area in the back garden.

In another example, Australian’s who are a little bit home renovation crazy at the best of times, went even more mad during the global pandemic, when international travel was off the table. But too few made the link that their new home was created on the back of tainted timber. Nor have they made the links that the daily discussion about supply chain delays for timber products probably mean a beautiful hard wood forest is being raised to the ground in a developing nation. 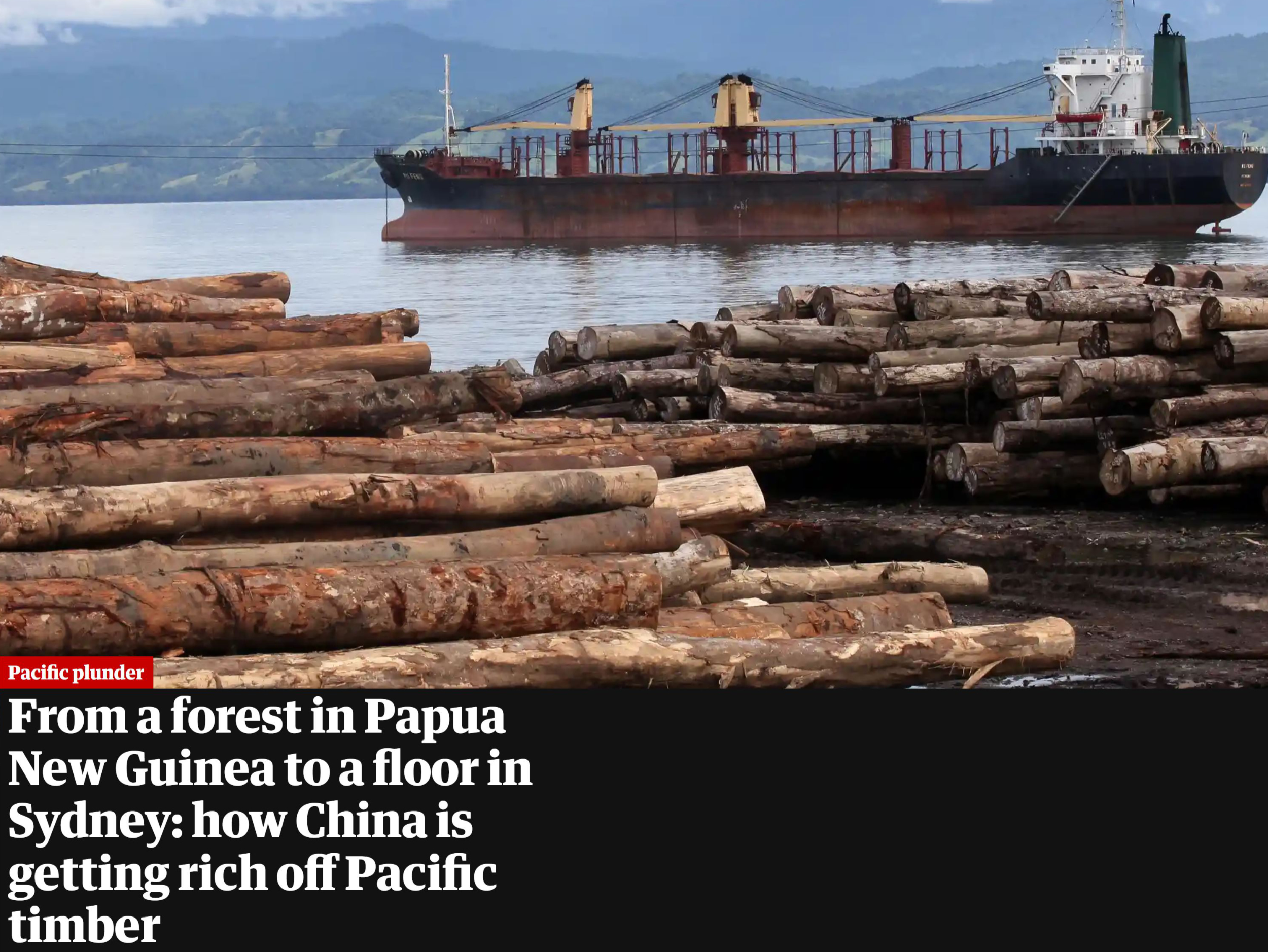 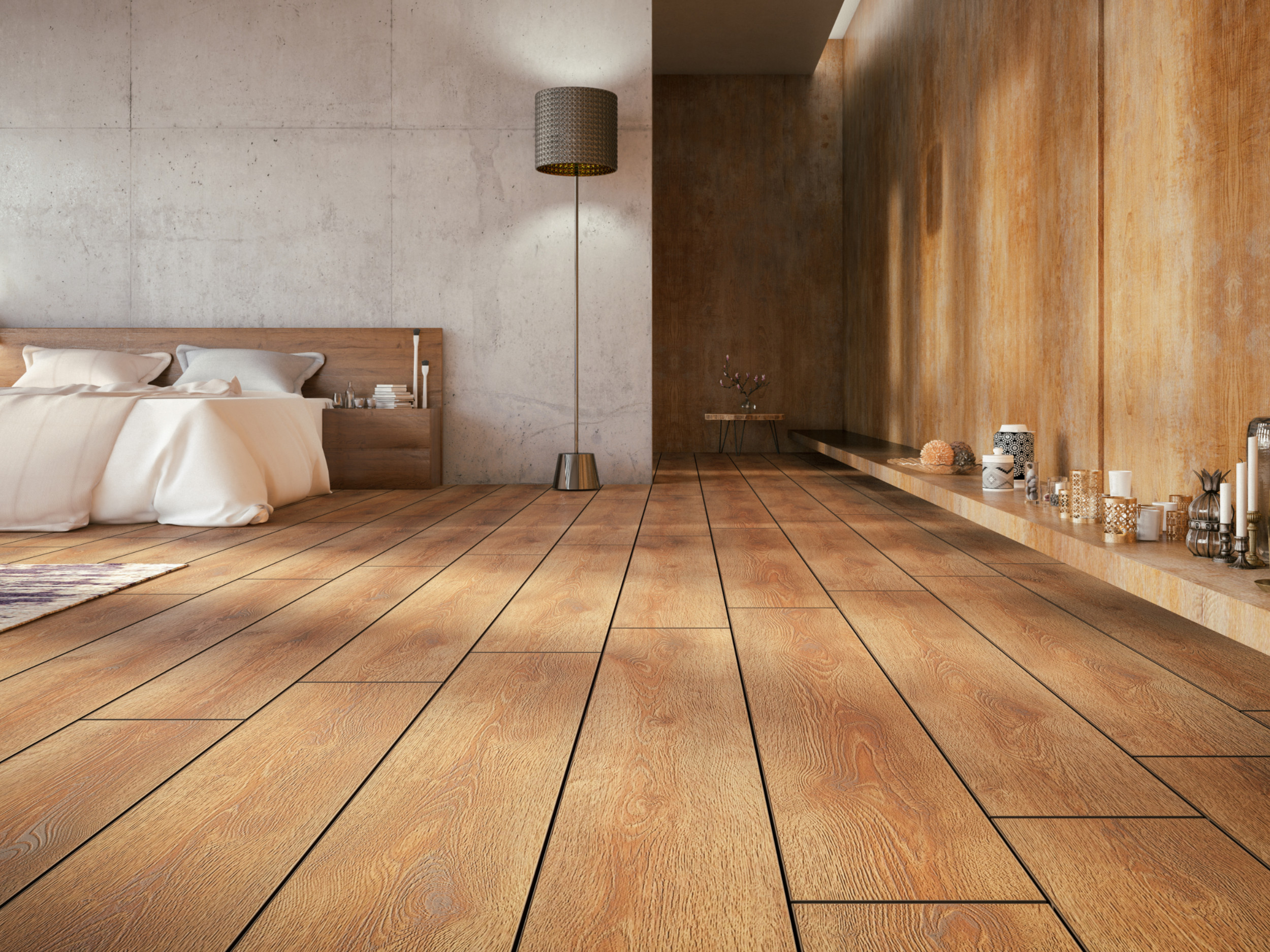 So, back to the question, why are we willing to destroy the only home we have? And how do we find it so easy to ignore what we are doing to nature and wildlife?

If we assume that humans are simply animals, then this may explain what is happening. We are simply taking advantage of our superior adaptability and are fully exploiting our ‘ecological niche’.  But most humans would dispute that we are simply animals and would claim that our capacity for self-reflection and ‘rational thought’ would enable us to behave differently. Which evidently hasn’t happened yet, so we need to ask the question, “Why not?”.

This means examining the guiding ideology (also called a theology or first philosophy) that co-evolved with the industrial revolution in Europe starting with the enlightenment. To clarify, this guiding ideology comprises the basic and implicit assumptions that we take for granted and NEVER question, so becoming unconsciously embedded in social norms and, as a result, self-reinforcing. These theologies have been very different both over time and in different parts of the world, Australian Aboriginal dreamtime stories bear little resemblance to Christian beliefs and teachings. What does not change is that these guiding ideologies take the form of stories; these narratives are easily told, re-told, remembered and embedded.

It also matters that we do not choose these theologies, we are born into them. They are deeper than a religion or similar belief systems. They are all-pervasive, deeply rooted in all aspects of culture, including media, education, business – everything. 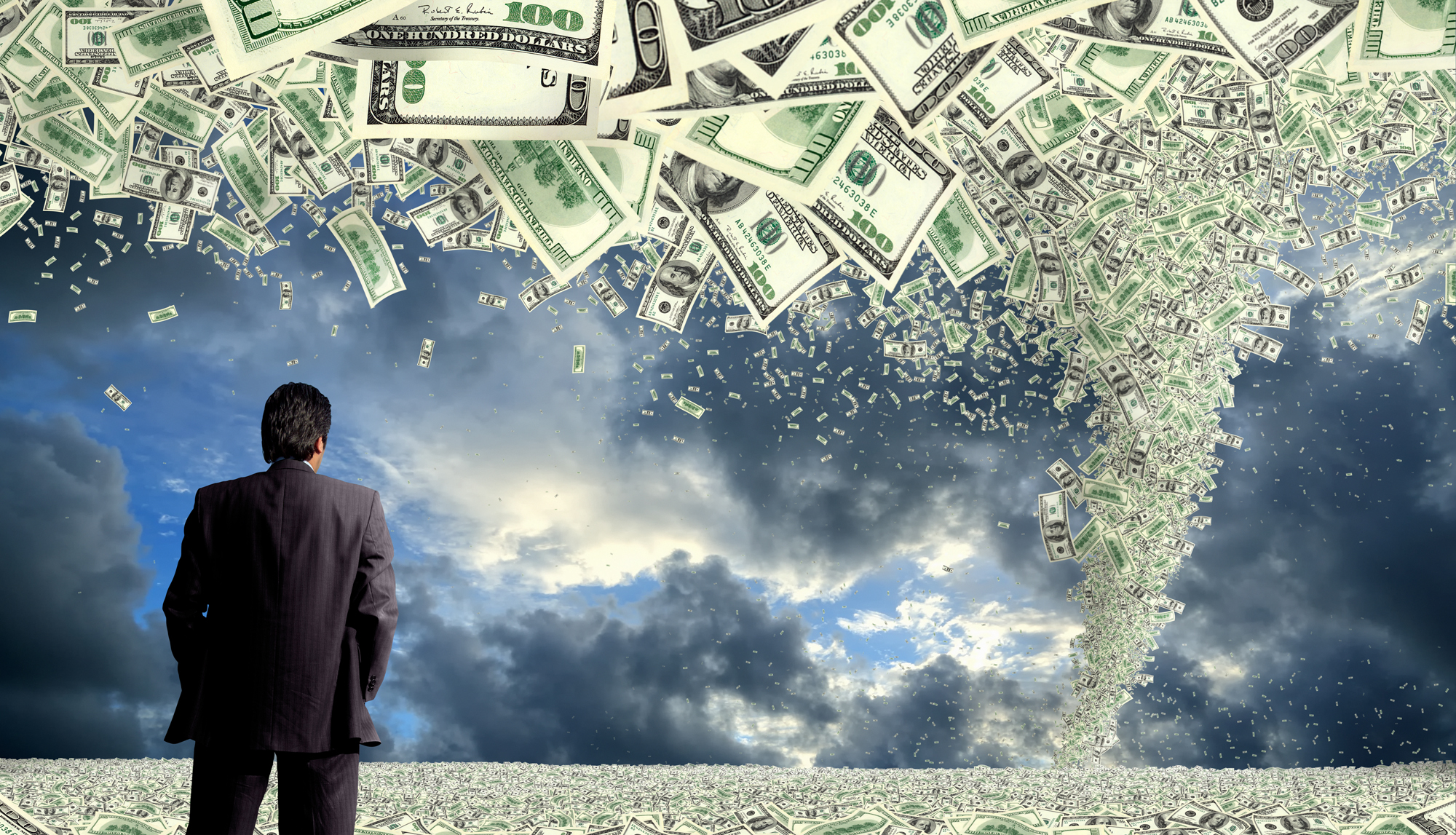 This becomes self-evident when we look at what content Western media of any type is willing to champion and what gets ignored. Everything in the Western mainstream media (books, music, TV, print, radio, film/streaming, online platforms, theatre etc.) is today geared towards consumption and not only because of advertising or product placement. The major story lines always involve characters who can and will consume. It does not matter whether they are advocating more traditional ‘stuff’ or ‘alternative choices’ like wellness or prepping. The lifestyle espoused is always about buying, acquiring, consuming.

Anyone without the means to consume is either ignored or vilified. The negative consequences of unlimited consumption are never shown in the context of consumption. The customer is not informed about the prose-and-cons of their potential purchase, so they can make an informed choice to go ahead or not. Those who would like to know about the consequences of consumption must seek this information out separately from documentaries (The True Cost, Cowspiracy, Seaspiracy etc), blogs or non-fiction books. Making a direct link between consumption and consequences is off limits in Western mainstream media.

Prioritising our own gratification over nature is embedded in our guiding ideology and has been for a long time. A recent book, Theology and Climate Change, by Paul Tyson, examines the question of our current guiding ideology and its origins in great detail. His central argument is that a particular type of Western and Christian theology that he calls Progressive Dominion Theology (PDT) profoundly shapes the modern and Western outlook on nature.

He argues that PDT applies to all modern Western thought, irrespective of whether they are held by Christians or those who have explicitly renounced Christian theology. He observes that these assumptions are held so deeply that even though their (theological) origins have been long forgotten, “that [this] theology remains a primary cultural force shaping the practices and values that define our life-world”.

When applied to the natural world, in our modern understanding, nature has no inherent meaning and hence no inherent value. It is not divine, as it was in most earlier theologies. That, in turn means that is perfectly OK for us, as humans, to make nature fit ‘our’ purpose. In fact, it puts no constraints at all on what we do with nature. We have separated morality from nature and now we find there are no moral reasons why destroying nature is actually wrong. 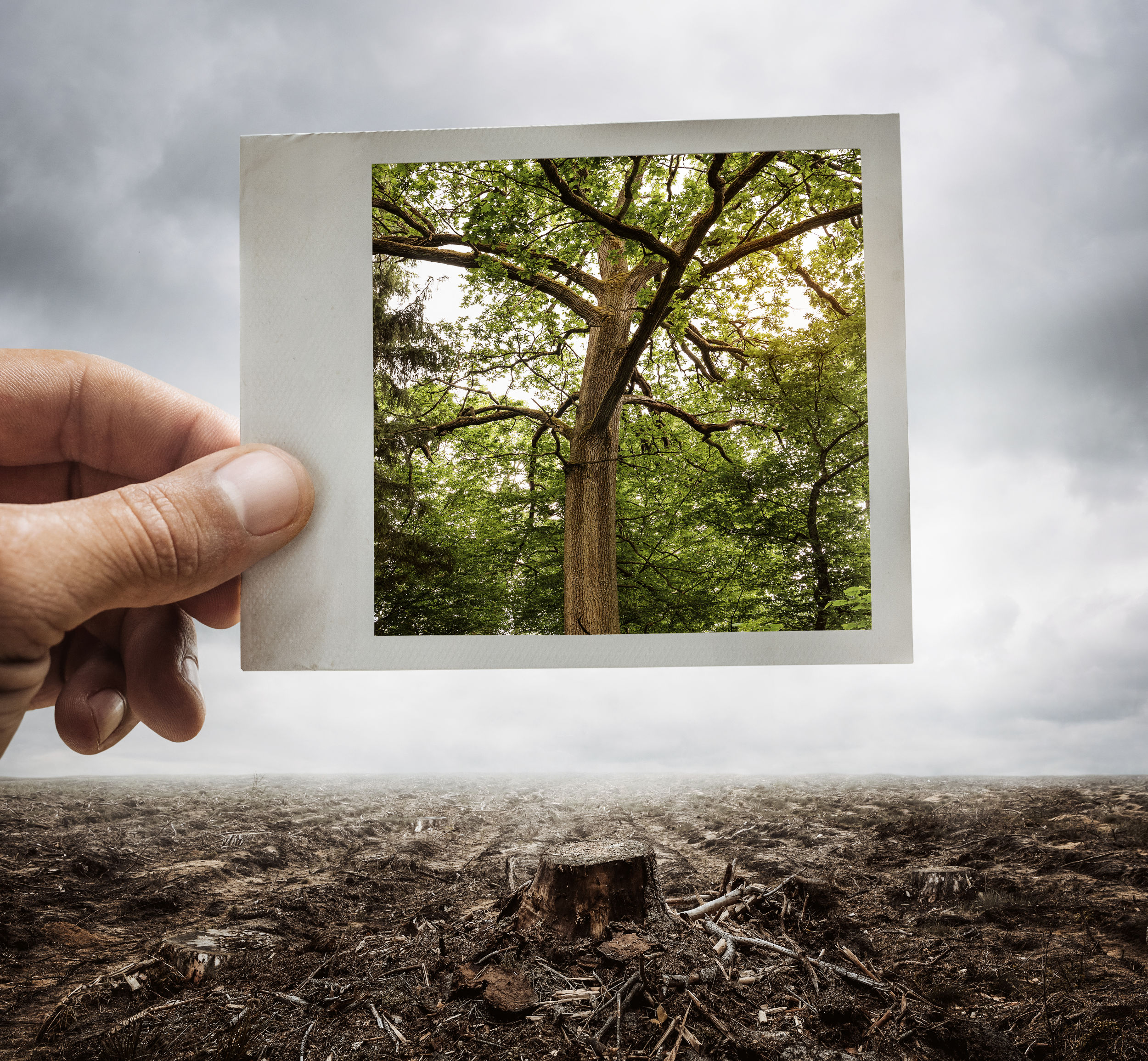 This presumption of sovereignty, of rulership, over nature is now so deeply embedded in our assumptions of ‘being human’ that we no longer notice its origins and we have only just begun to question its usefulness to our continued existence.

What we have ended up with is a belief in our own ever-increasing power and sovereignty (free will), through the ‘progress’ provided by science and technology. The aim of the powerful today is not to restore balance with nature. Their aim is to become more distant from nature.

Billionaires, rather spend their money on dreams of living in space or on Mars than fixing the environment. They build bunkers and boltholes as ‘fail-safes’ and invest in companies promising ‘eternal life’ (via life extension or an upload into the ’Matrix’).

We do not see these billionaires and their space/matrix dreams as flawed. No, we celebrate them. Elon Musk has 85 million followers on twitter and is seen as a ‘visionary’.

That Western (and most developed and developing) societies fully buy into this project is easily evidenced from looking at government budgets – health & education are almost always the top priority for those who vote and the OECD average spending on health is 9% of GDP (20% in the US!). In contrast total spending on environmental protection was around 0.02% of GDP in France and Germany in 2018 and 0.01% in the UK (many countries don’t even bother to compile data on environmental spending).

That there are limits to growth (was and) is still a fringe belief today. Physics is useful for enabling ‘progress’ but cannot be seen to spoil the economic growth party. So, economists are taught to believe in limitless growth, unlimited extraction and substitution of natural resources (ignoring the energy cost of doing so) and see no problem with ignoring the effects of dumping waste into the environment (CO2, methane, chemicals, plastics, contaminated waste water etc.).

When physics predicts calamity due to global warming, those warnings are first ignored, then downplayed, then actively attacked and finally ‘taken seriously’ by entering dubious pledges and meaningless commitments, which is the stage we are currently in.

The same is playing out in relation to biodiversity. The science that tells us that we have set off the sixth mass extinction event is not the science anyone in power wants to listen to. Destructive consumption is baked into our ideology about progress. That’s why planned obsolescence or fast fashion are not a problem to the majority. Ever-increasing consumption means ever-increasing growth and progress. This is the belief system we hold, and our politicians, business leaders and celebrity investors parrot it back to us constantly. All the talk about sustainability is never at the expense of more ‘growth’.

No, we believe in sustainable growth and represent this in a deeply flawed manner to make sure no one notices the inherent contradiction. The image below left shows a typical representation of ‘sustainable development’. All 3 dimensions are depicted as equal and the ‘sustainable’part is just the small, overlapping area in the middle. This commonly used diagram implies the three dimensions are independent and can also grow independently. This representation is misleading. In reality the Economic and Social are subsets of Environmental, as shown on the right. No society or economy can exist outside environmental limits, so we should make that clear when talking about sustainable development or use. 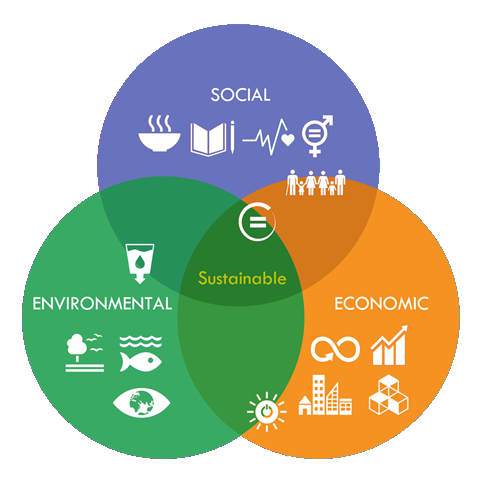 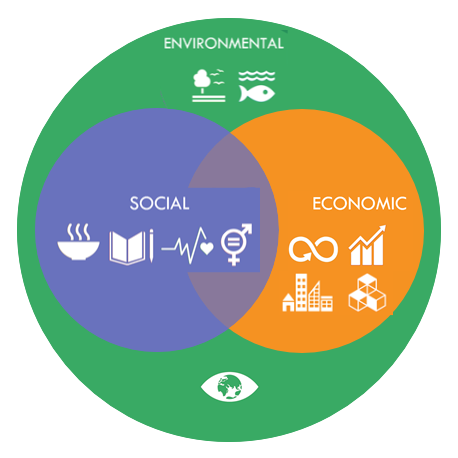 Arguments between capitalist and socialists are about the distribution of the spoils, not about the value or morality of doing the spoiling. Progressives and conservatives may argue over greater equality or moral values embedded in culture, but they don’t argue over the question of our power over nature. Both progressives and conservatives believe that our ecological problems will be solved by technology, not by fundamentally changing our relationship to nature.

Even the latest trend in conservation of ‘pricing ecosystem services’ is equally an expression of this underlying theology. If nature has no inherent value that makes it worth protecting, then the only way we can think of making it valuable is by putting a price on it. This shows a dearth of imagination that we ought to feel ashamed of, but instead this approach is being universally embraced as the ‘best way forward’. 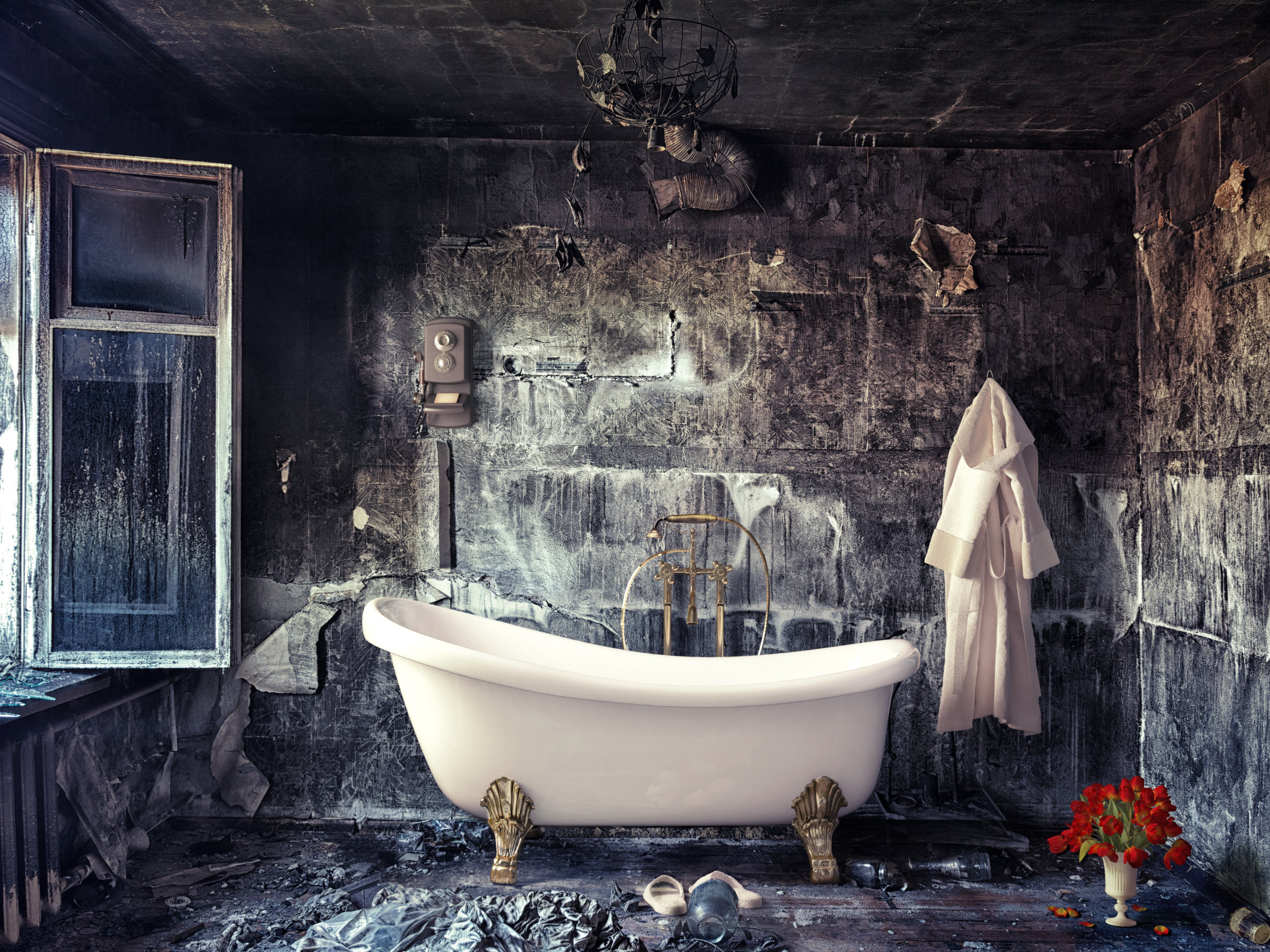 So, how do we become conscious of this progressive dominion theology way of thinking, so we can start to change it?

Let’s go back to property renovation and ask a simple question, “Would you only renovate your property if in doing so you would be able to get gift tax deductibility on your renovation, for everything you spend over $2?”.  No, this would be ridiculous right? You wouldn’t let your home decay around you simply because gift tax status doesn’t apply to home renovation projects, would you?

Here’s the thing, you already have. Are you ready to challenge this way of thinking and behaving?