A Message To The Australian Antiques & Auction House Industry 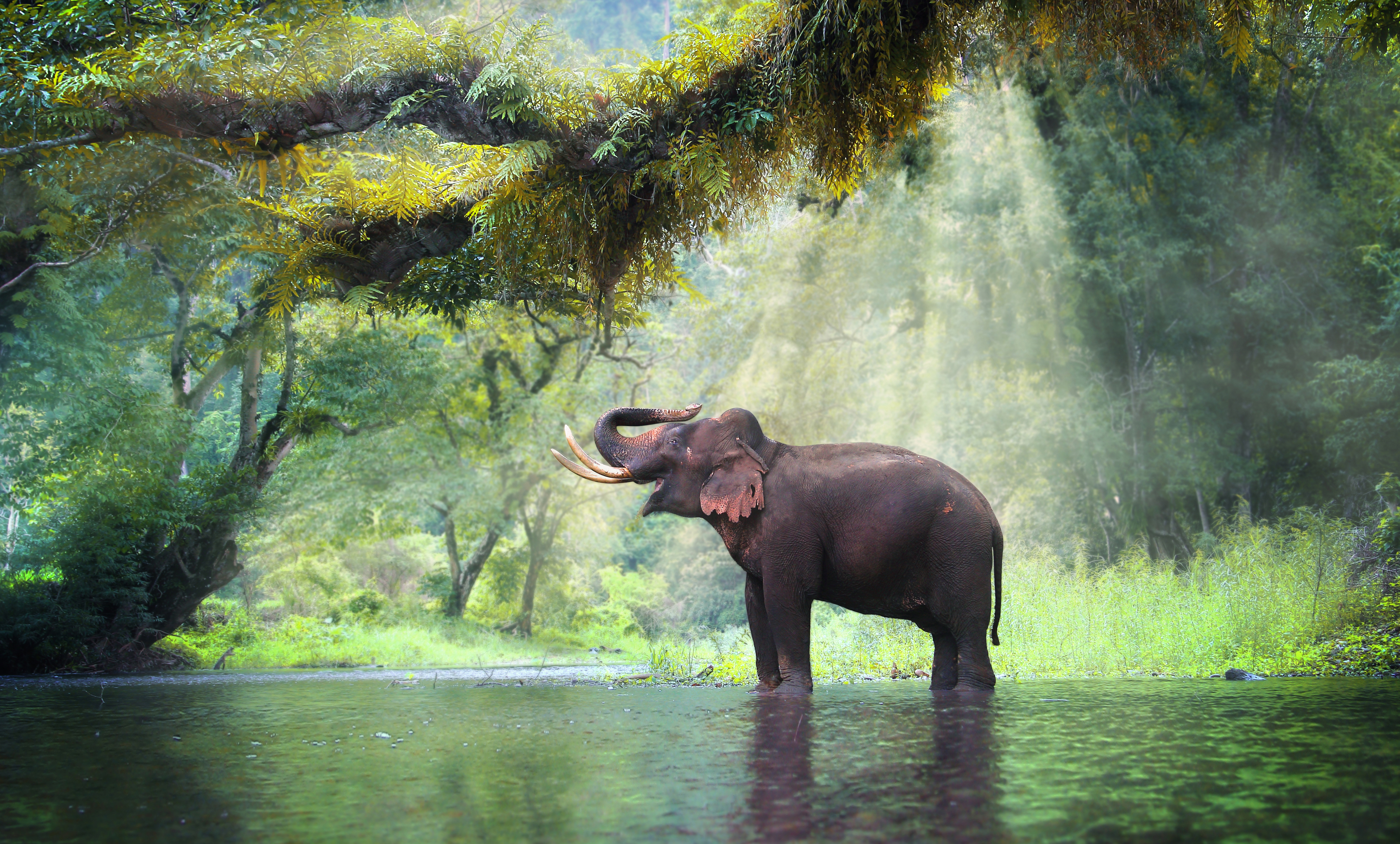 Donalea Patman, the founder of For The Love Of Wildlife, has highlighted numerous examples of why Australia needs a total domestic trade ban. Some are documented in a recent Nature Needs More Blog: 5 (Alternative) Actions To Make A Difference For Wildlife In 2018. 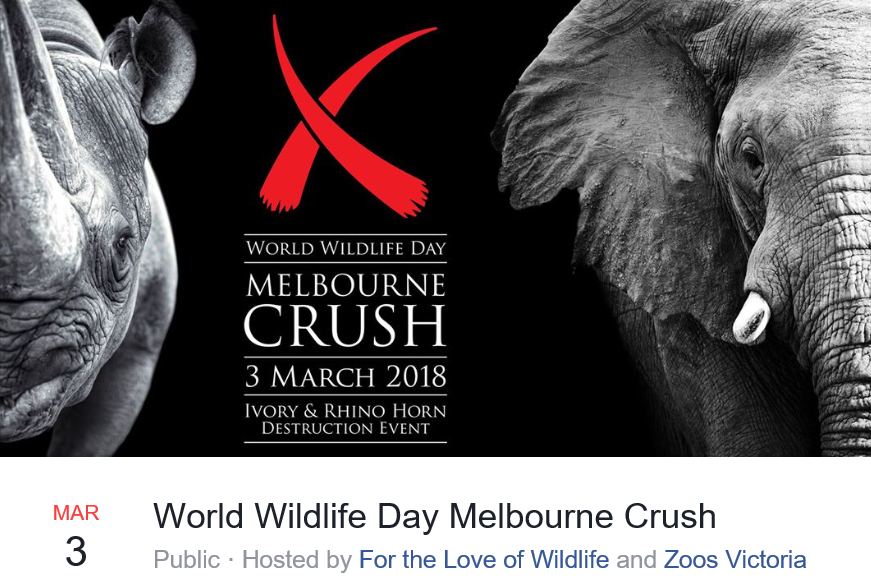 Given the decimation of elephant and rhino populations in both Africa and Asia, anything that could undermine the commoditisation of rhino and elephant parts, in the form of art, decorations or gifts, would be of benefit to reducing the global desire for such items. In addition, closing down the trade of pre-ban items would remove the possibility for traffickers to launder horns and tusks, from recently killed rhinos and elephants, in to a local, legal market.

So, the question is, who benefits from keeping this trade open? In addition to the traffickers, there are only 2 groups that benefit:

That’s it, only these two tiny groups benefit from keeping this trade open. Do we as a society really want to put elephants and rhinos at risk for the vested interests of a few hundred (may be a few thousand) people? 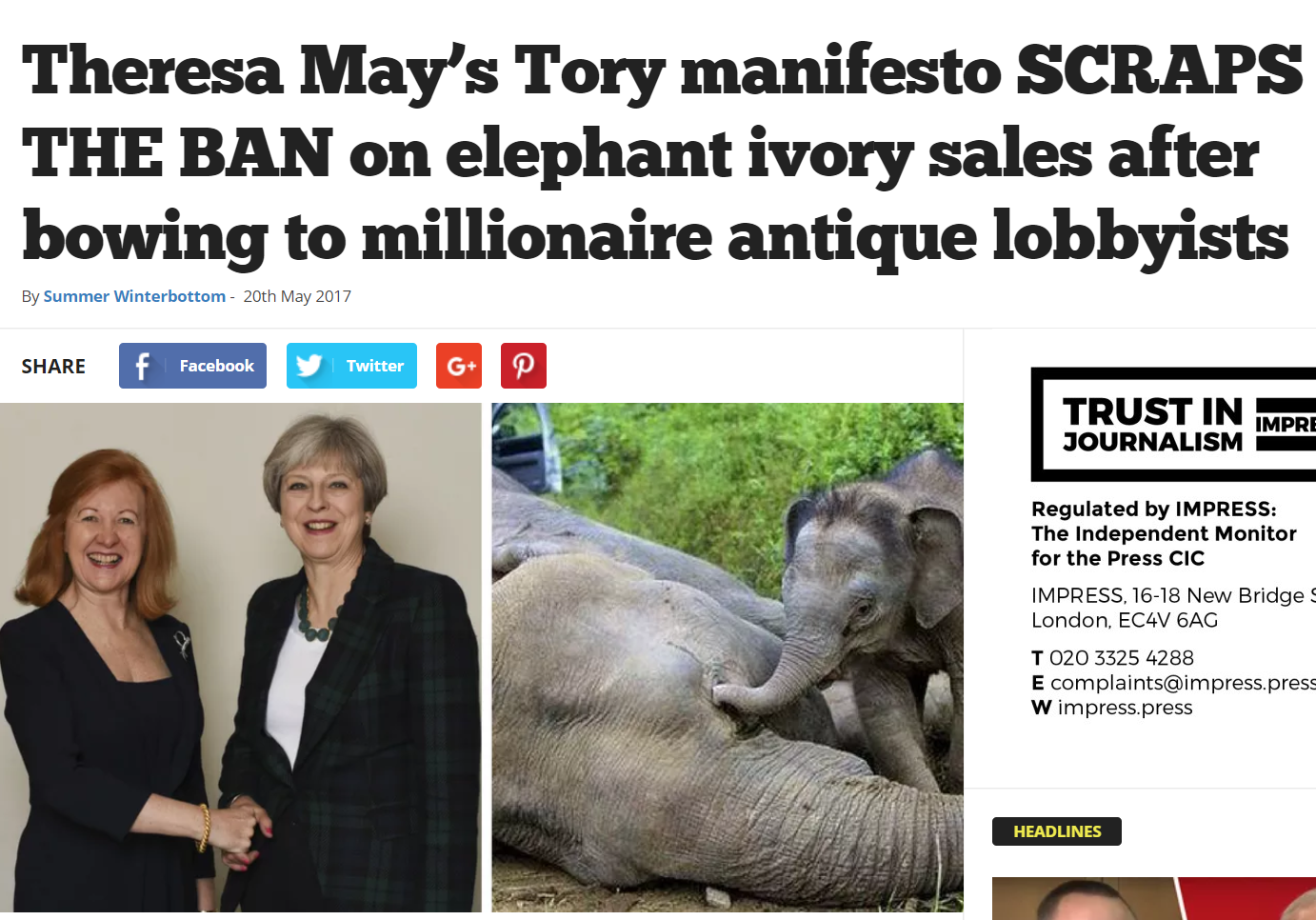 Representatives of the antique/auction houses/objet d’art/collectables industry, in Australia, could lobby government to maintain the status quo or to enact only a partial ban. They have certainly tried to do this, with some success, in the UK.

Similarly, when the State of New York reviewed its position on ivory sales, it invited responses from the antiques and auction house industry. To read the full responses from Sotherby’s and Christie’s follow this link. I want to just point out a couple of their statements:

Sotheby’s statement (from the document): Some changes to the current law would be appropriate and may include things like: stiffer penalties for illegal ivory trade.

While both Sotheby’s and Christie’s supported ‘increased penalties’, neither acknowledge that, while they were making profits from selling these items, they were not paying the TRUE COST of the sale. The increased penalties that they ‘welcomed’ or they thought would be ‘appropriate’ come at the tax payers expense to police and prosecute. Have their cake and eat it is a phrase that come to mind.

What did we find in Australia? In addition to the Sotheby’s and Christie’s type comments noted, we heard statements including:

Given most of the industry in the USA, UK and Australia appears to be looking at this purely from a business perspective, then let’s propose a purely business argument/solution. If they want any type of trade to remain open, they must pay the true cost of policing the market. If companies won’t accept the need for change on ethical grounds, then let’s make it purely commercial.

Research has already been done highlighting the percentage of ‘tax payers’, in a number of countries, who either think the trade is already illegal or that it should be illegal. 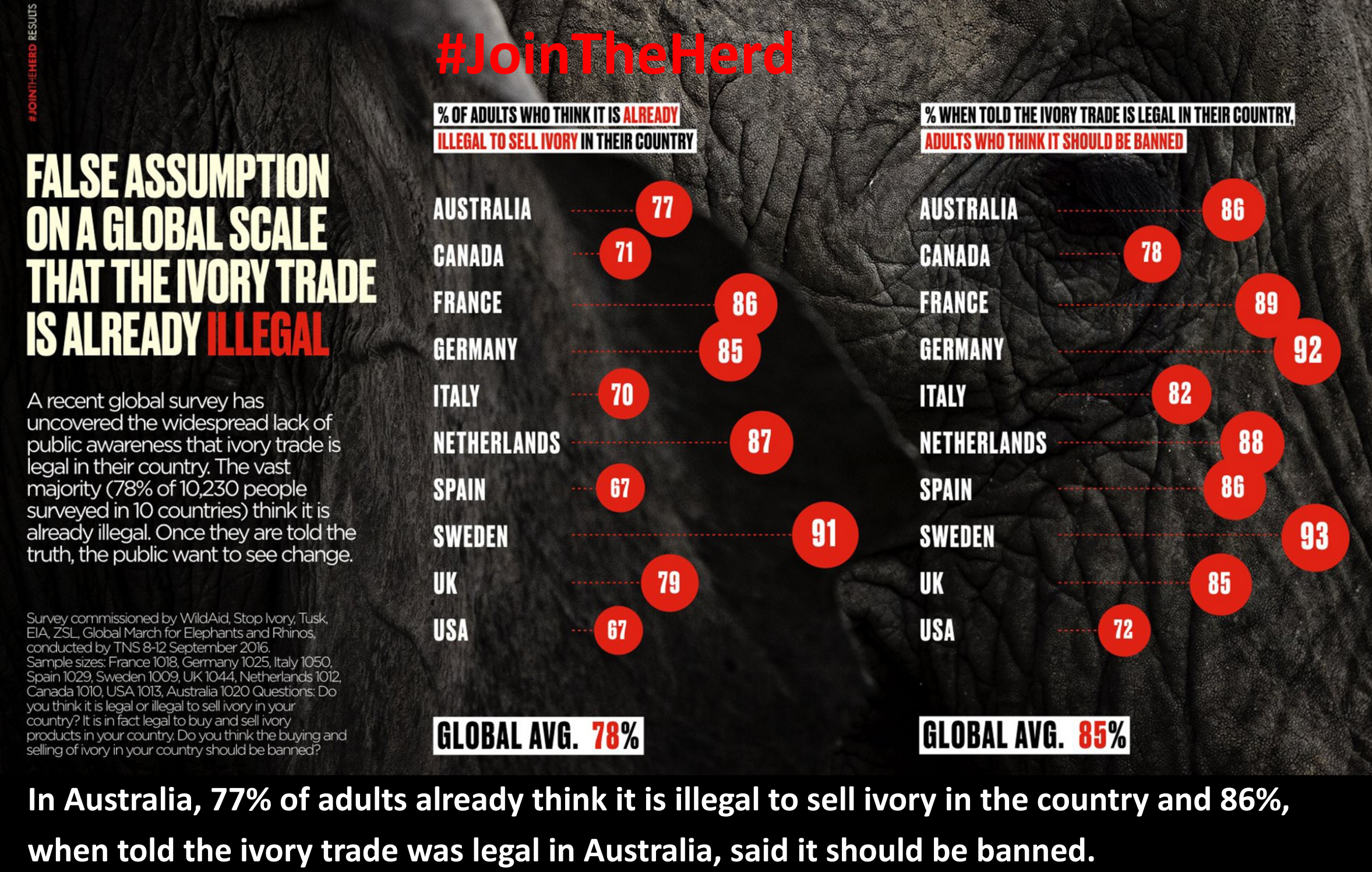 I know this is a complex argument. Many people around the world are understandably questioning why tax payers are paying the bills of some industries, such as bailing-out the financial industry or covering the cost of environmental clean-ups, that the resources industries should be paying. All good questions to ask and one that has lead to a Royal Commission in to the Australian Banking Sector for example. While we may not like these bail-outs, the finance industry and the resources industry are currently ‘too big to fail’, without taking down national and global economies. The antiques industry is NOT too big to fail; tax payers don’t need to pay part of its costs and prop it up. As a result, if the antiques industry doesn’t want regulation, then just agree to pay for the monitoring, policing and prosecution costs associated with maintaining the status quo or enacting a partial trade in elephant ivory and rhino horn. These costs are incurred solely for their benefit.

Any organisation that wants to sell these items, from the largest, global players such as Sotheby’s and Christie’s, to the smallest collectables business (and including online retailers) must pay the cost of policing and enforcing the domestic trade, that is in place ONLY for their benefit (and that of their customers). This could include, but isn’t limited to:

I could go on, but you are getting a sense of what is required to monitor this trade effectively.

Other things to consider may include, the annual licence document being displayed in the store (or online shop), so that customers can monitor. For instance, if someone sees ivory for sale in a shop or online, they should be able to easily access the current licence information. If they have any concerns about the legitimacy of the item or company, they can use the type of ‘Wildlife Witness’ Apps that are being used to catch illegal wildlife traders in market places worldwide. 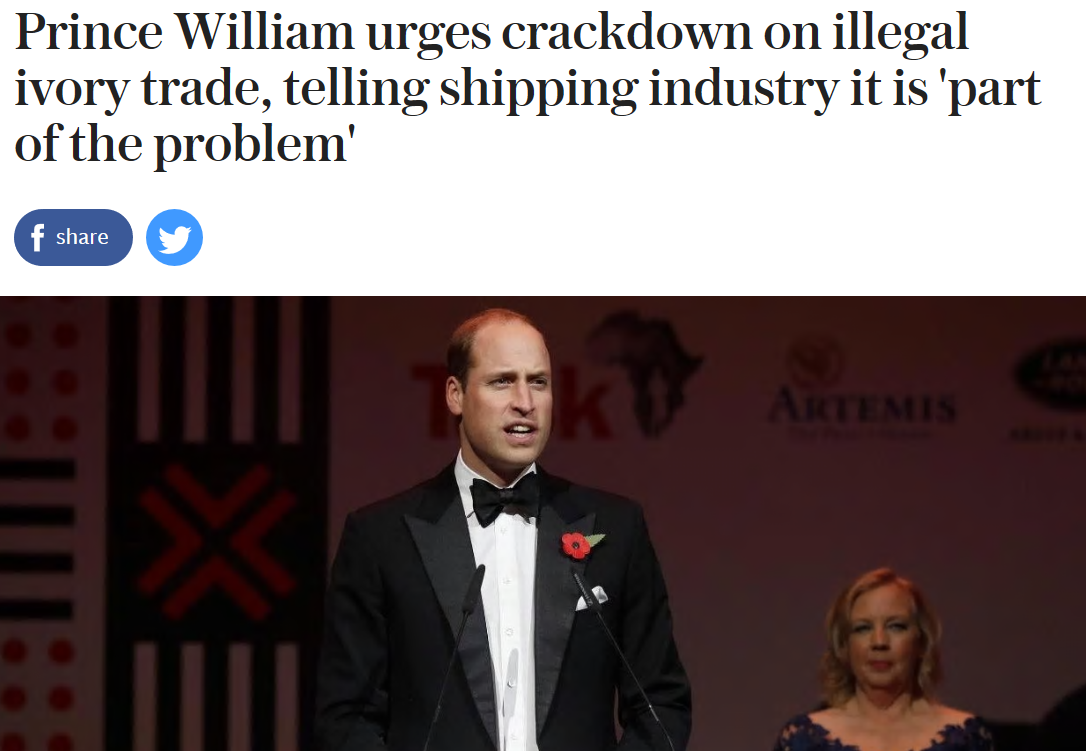 It is obvious to anyone with a grasp of basic economics that the industry paying the true monitoring and enforcement costs would kill this market instantly. Recently Prince William highlighted that the shipping industry was a “central part to the problem”, and went on to sat “Ultimately, I believe that tackling the illegal trade in wildlife is in your interests as an industry,” he told leaders…..The trade undermines security; it fuels organised crime; and it robs developing countries of a natural resource that will contribute to their future prosperity.” As part of the research behind the #NoDometicTrade campaign in Australia, the customs officials we spoke to said “Optimistically we are confiscating 4% of illegal wildlife products at our ports. This clarifies for the antiques/auction house industry and any of its customers who want to keep open a domestic trade in elephant ivory and rhino horn the level of resourcing customs needs to keep open a trade which is solely for their benefit. I hope this helps them make an informed decision about how they respond to the request for a total domestic trade ban of elephant ivory and rhino horn, of any age.

The size of the (legal) market and the associated profits are just too small to cover the true costs of keeping it open. The only reason it is still open is that tax payers are covering some of the antique industries business expenses. While the general public may have to currently cover such costs for industries considered ‘too big to fail’, the antiques industry doesn’t fall in to this category.

In Conclusion – The Antiques & Auction House Industry Has Choice

It’s time for the Australian antiques and auction house industry to realise that society is changing and that we as a people want to see the domestic trade in ivory and rhino horn, of any age, banned. I am sure the industry will trot out the well-worn ‘free market’ delusion in their defence, but let’s be clear, there is no such thing as a free market.

Just by way of comparison, you can’t buy or sell laser pointers in Australia. That trade was banned in what had to be record time after a couple of incidents with blinding pilots during landing at Australian Airports. Governments abandon the ‘free market’ narrative when it suits political or security interests. In the same way, public interest should hold sway regarding a total ban of the domestic trade in ivory and rhino horn of any age.

If the industry wants to mount an argument to keep the trade open, then it is advised to ensure it can bear the full costs of policing, testing of seized items and mounting prosecutions, which is fair from a commercial/free-market perspective.