Ensuring CITES is Relevant and Effective 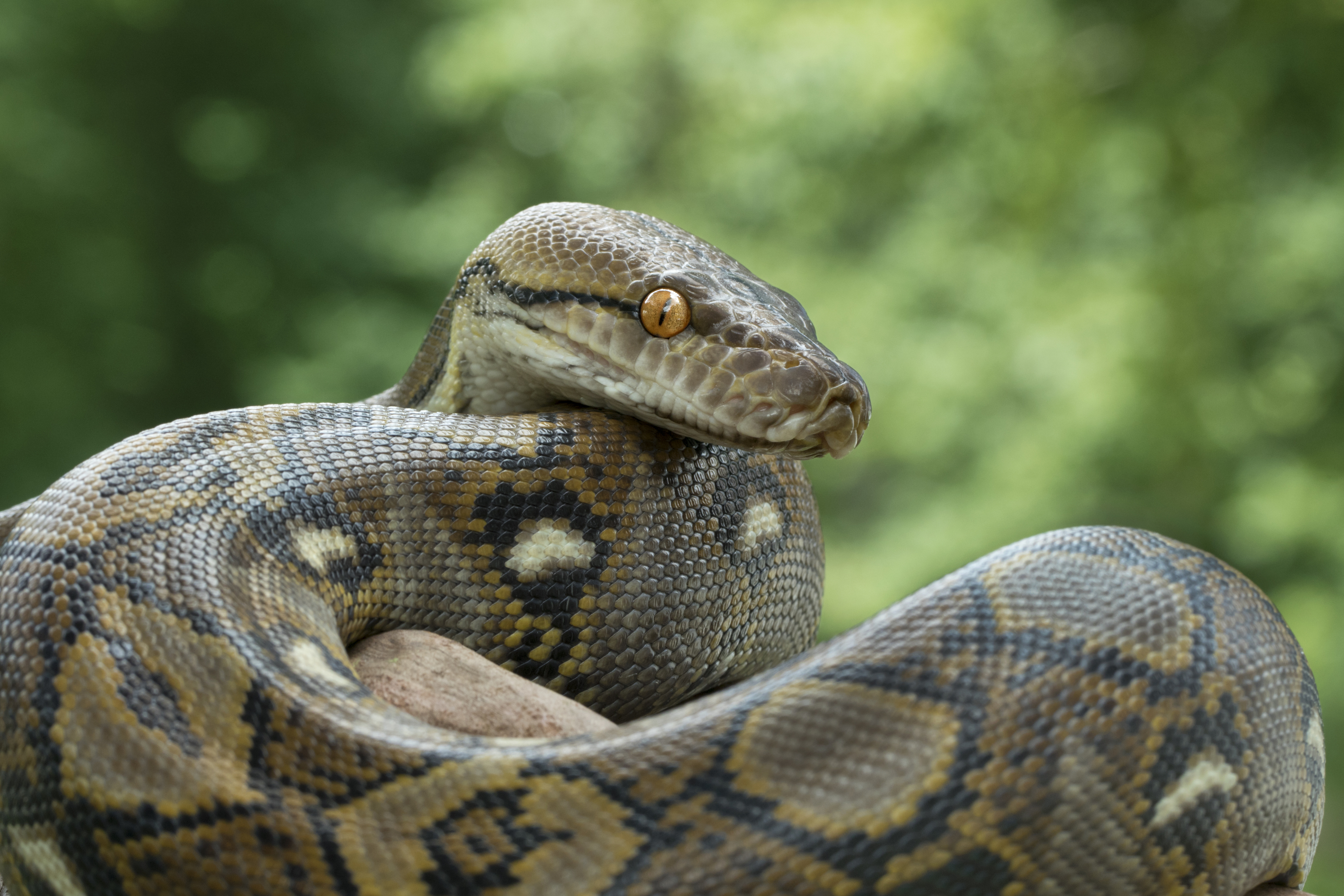 In early September, Nature Needs More wrote a blog regarding the scale and value of the international wildlife trade. This and other recent NNM blogs also highlighted the inadequate levels of resourcing for monitoring of the wildlife trade and significant flaws in the CITES permit system and trade monitoring database.

Currently 35,000 species of both flora and fauna are listed for either exclusion from trade or have trade restrictions. So, in theory at least, customs officials in every CITES signatory country have the responsibility to monitor the export and import of these 35,000 species to ensure proper regulation, traceability, transparency and enforcement of trade.

Even in a wealthy country, such as Australia that could invest in strong border protection to fulfil its commitments as a CITES signatory, customs officials receive only a few hours training in wildlife identification and enforcement matters. It is self-evident that this level of training is completely inadequate in view of the massive number of species passing through the borders of signatory countries; and not all signatory counties will have the resources to conduct even this minimal level of training.

Some of these concerns may have been resolved if the e-permit system, that has been discussed since 2010, had been applied; but only minimal progress and investment has been made to implement such systems in nearly a decade. These problems are significant and not new, so why haven’t the global conservation brands been willing to challenge CITES and the signatory countries to make the necessary investment to resolve them?

When asking representatives of some of the most well know global conservation organisations, sadly too many responses took the form “We know the system isn’t great, but it is all we have”. Whilst this pattern of response may be attributed to mediocrity, more worryingly was that, when pushed, some admitted that they don’t say anything that would upset the CITES secretariat or the parties as they “don’t want to be uninvited” to the working group meetings in Geneva or uninvited to the Conference of Parties. To clarify, only signatories (governments) have an automatic invitation to CITES meetings and working groups; the conservation NGOs are invited by the ‘grace and favour’ of the formal stakeholders.

Given the scale of the (legal and illegal) wildlife trade crisis, what might provide a circuit breaker to the inadequacies of the current monitoring system and levels of commitment, as we can’t accept the status quo and a business as usual approach? As a starting point, we propose considering two ideas:

Reverse-listing isn’t a new idea, it was first put forward by Australia in 1981 to the CITES Conference of Parties in New Dehli. At the time only 700 species were listed on Appendix I and II and it was perhaps unsurprising that the proposal failed to garner sufficient support.

Today, with over 35,000 species listed, we are in the opposite position in relation to identification and control procedures under CITES, it would be more practical and wiser from the point of the Precautionary Principle to carefully select and list only those species that are demonstrably not under any threat and where trade can be proven to be ecologically sustainable, not just in relation to the species, but also in relation to the ecosystems it resides in.

Given that that the legal trade in wildlife was estimated in 2012 to be worth US$320Billion per annum to business, why would they struggle with the second suggestion of a levy on trade? A levy of only 1% per trade transaction could raise around USD $3billion per annum, covering both the expense of collecting it and giving CITES and all parties the necessary means to implement trade and control systems that are transparent, tamper-proof and fit for purpose. In addition, the burden of proof in relation to allowing trade should be at the expense of those who will benefit from the species being considered for trade. We cannot expect to privatise all the profits from the trade without raising sufficient revenue for an effective monitoring and control mechanism. The current situation simply enables trade but fails almost completely when it comes to enforcing trade restrictions imposed by CITES.

Given the scale of the trade that needs monitoring and its financial value the annual budget for CITES to administer the global trade system is a paltry US$6Million; a small levy on trade could redress this resourcing imbalance and help all signatory countries with implementing state-of-the-art systems that interface with customs and close all current loopholes.

With this in mind, Nature Needs More Ltd in collaboration with For the Love of Wildlife Ltd has summarised these thoughts in a letter, which has been sent to the CITES Secretariat in Geneva. We had been waiting for the new Secretary General to be appointed but given the delay – another worry – we have chosen to send the letter to the current acting Secretary General while the role still remains vacant. 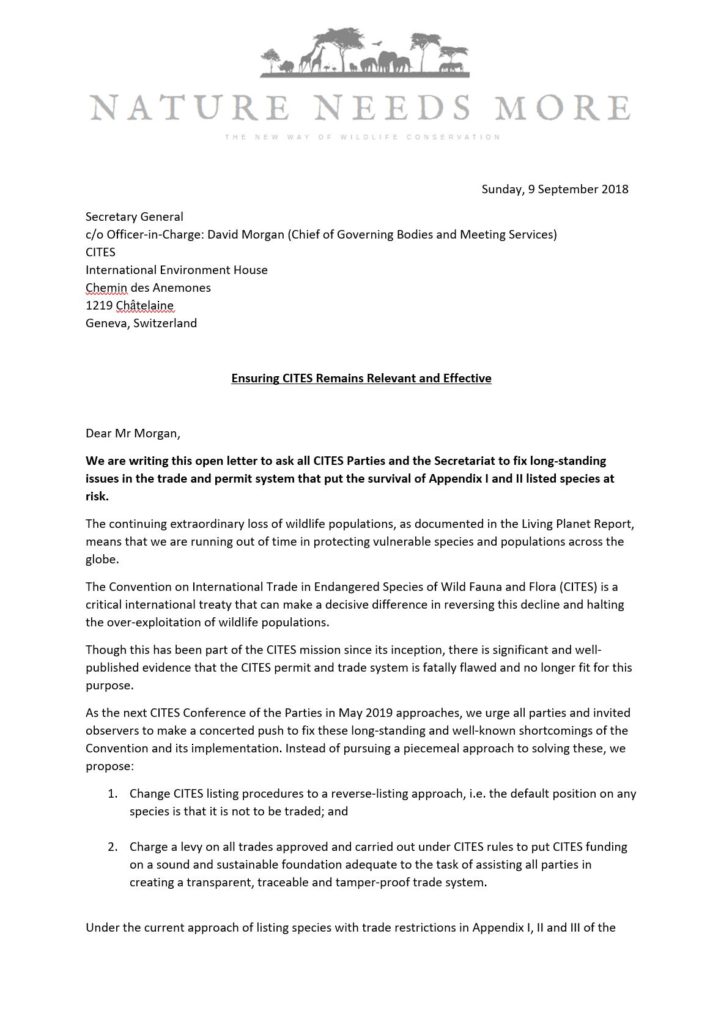 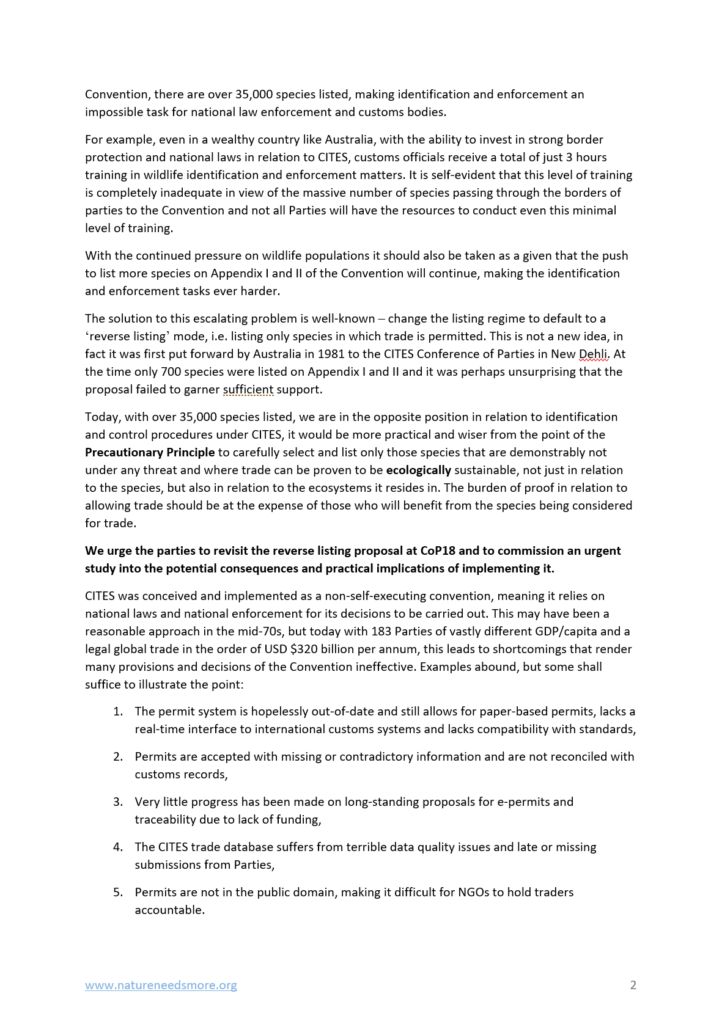 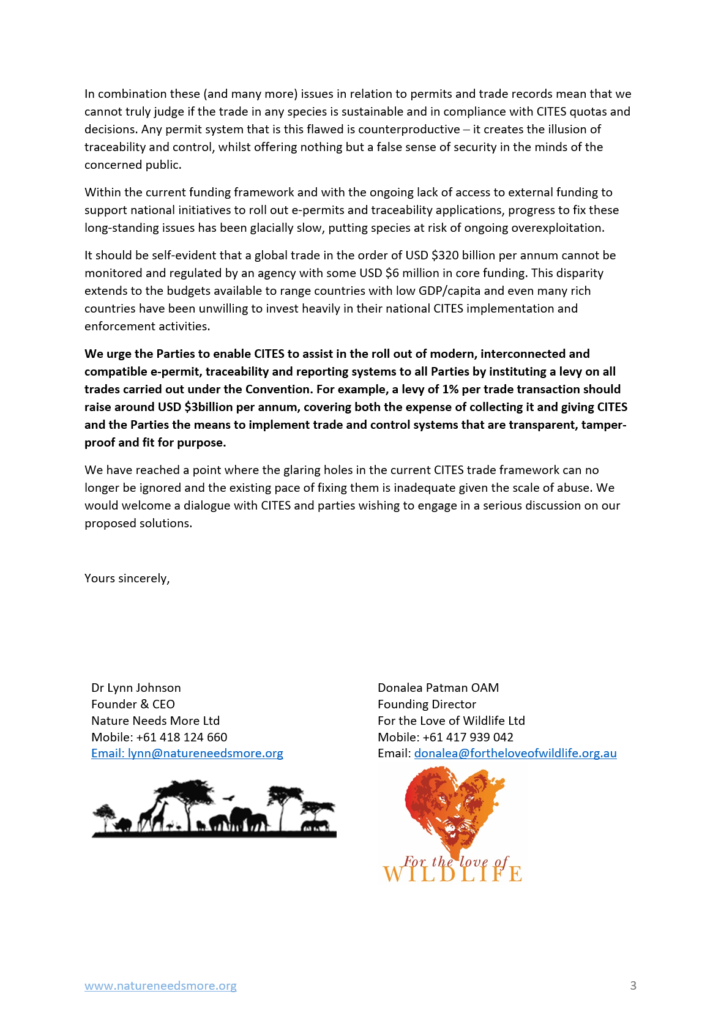 In the coming weeks and months, leading up to both the London conference on the illegal wildlife trade and the next Conference of Parties in Sri Lanka in May 2019, we will forward copies of this letter to responsible ministers in key signatory countries to ask for their support in bringing these ideas and call for decisive action to the table at CoP18.

In February 2019, we will resend the letter to the CITES Secretariat as an open letter from concerned wildlife NGOs to push for action at CoP18. We are inviting any organisation or activist group who would like to be a signatory to this letter to let us know and we will include their name and logo on the signing pages.

To do so, please contact: Peter Lanius via peter@natureneedsmore.org