The South African Government announced on September 21, 2018 that rhino poaching for this year to-date is down 26%. While some people have voiced disbelief regarding the scale of the decline published, it does come in conjunction with both anecdotal and quantitative evidence from a number of conservation NGOs monitoring the demand for rhino horn in Viet Nam, that the demand for rhino horn has declined and it is less fashionable than it once was.

We have decided to reflect this positive development in our new (interim) campaign. For those who have been supporting Nature Needs More for some time, you will know that we had planned for our next Breaking The Brand  RhiNo campaign to be a collaboration with a young Canberra based artist, Nayana: https://natureneedsmore.org/the-men-who-could-save-the-rhino/

In early August, Nayana was in a car accident and while he is recovering well, sadly his service dog, Angel, was killed in the car crash. Nayana has re-started his painting, which is helping him to stay focused on the future.

The campaign highlights the leadership credentials of those businessmen who have made a positive change and are no longer using rhino horn to gain favours or close business deals. It directly addresses the ‘laggards’, the businessmen slow to accept that gifting rhino horn shows them as mediocre businessmen they obviously are, given they need the prop of rhino horn to seal a deal. We will be running this campaign until the end of 2018, in the same business and lifestyle magazine we have used before; the key publications for our businessman target group. Again, the objective is to trigger status anxiety by focusing on the negative perceptions of professional brand, reputation, commercial acumen and leadership ability of someone still using rhino horn.

Fundraising for the Viet Nam campaigns

Over $120K has been raised for the next RhiNo horn demand reduction campaigns in Viet Nam, including the interim campaign. After the success of our inaugural Style Icon Afternoon Tea fundraising event in May, which raised over $19,000 from over 350 donors worldwide, we were asked by our supporters for something a bit sporty and, based on feedback, here it is – the inaugural World Games For Wildlife, which will take place from November 5 to November 21, 2018. But you can do something active anytime from now until the 30th November 2018, when we will announce the total raised by this inaugural event. As with the Style Icon Afternoon Tea, we plan to grow this initiative over the coming years.

Our goal for the first year of the World Games For Wildlife is to raise $30,000, which will go to the next RhiNo demand reduction campaign in Viet Nam. We have already raised in excess of $120, 000 for this campaign, but need to reach $150,000 to be able to run campaign adverts at the frequency and duration to maximise the impact and give the best possibility to drive behaviour change in this laggard group. This is such an important time in the lead up to the CITES CoP meeting, being held in Sri Lanka in May 2019; we would like to get maximum exposures on a highly targeted demand reduction campaigns.

You can do anything active to take part in the WGFW, whether running, cycling, swimming, skipping or walking. Alternatively, you can organise a game of your favourite team sports, be that football, cricket, baseball, hockey, volleyball, rugby or e-sports. Whatever you do, all we ask is that you register at https://events.natureneedsmore.org/event/world-games-for-wildlife/ways-to-do-it and help us raise funds to tackle the illegal wildlife trade. And please forward the link to any sporty family, friends and work colleagues who you think would like to help!

As part of the WGFW we are delighted to let you know that we have a growing number of Global Ambassadors lending their support to the event, including: 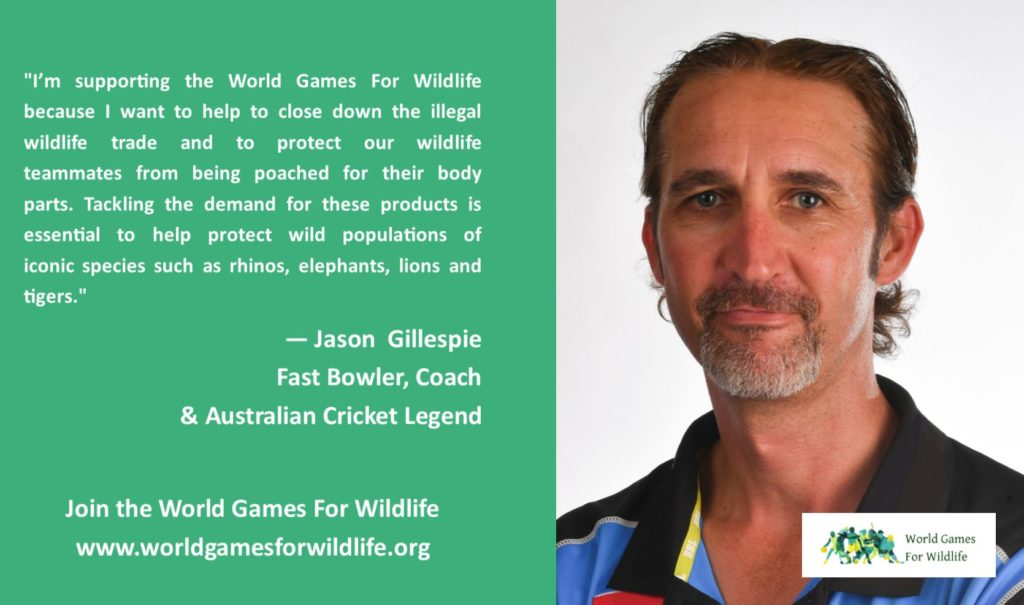 Check out who else has joined us via: https://events.natureneedsmore.org/event/world-games-for-wildlife/ambassadors We can’t them enough for all their encouragement and support for this event.

We hope that you will get involved with the WGFW or share this event with someone who you feel would like to get active for wildlife. Our wildlife teammates including our precious rhinos need all the support they can get right now!

We will keep you posted, and you can follow/share the WGFW social media pages: Facebook and Instagram